Scream Factory tucks you in for some DEADTIME STORIES on February 28th! 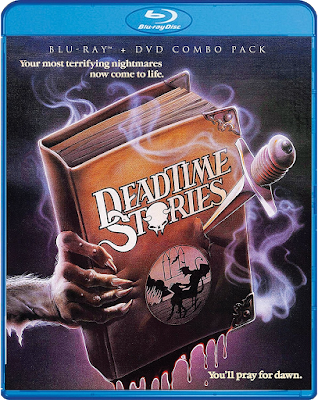 Honestly gang, I've never seen this one, but have always wanted to scope it out because I am a sucker for anthology flicks! The expendable income is low at the moment, so I'll have to wait for another kick-ass sale from Scream Factory to pick this bad boy up! But don't let that stop you!

Synopsis: Your favorite nightmares come to life in a horror/fantasy salute to the age-old bedtime story ritual. Travel on a mysterious journey to a medieval world populated by blood-crazed witches, evil experiments and captive maidens.

Then from the catacombs and dark caverns of medieval Europe you plunge into modern suburbia and the frolicsome adventures of a nubile lady jogger tracked by a savage werewolf. Finally, sensuality becomes macabre black comedy on the trail of three escaped mental patients who share a country house with a daffy murderess.

Extras:
Packed with extras and restored in HD, DEADTIME STORIES is available everywhere in a Blu-ray/DVD combo pack on Tuesday, February 28th! Order it today from AMAZON, BULLMOOSE, DIABOLIK DVD, or directly from SHOUT! FACTORY, which will net you this release early!