Mondo Macabro gives SUDDENLY IN THE DARK its Blu-ray debut on February 14th! 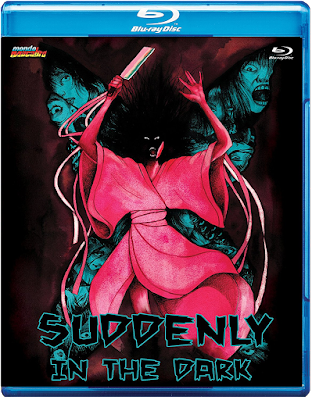 MONDO MACABRO INTRODUCES THE WORLD TO THE OBSCURE KOREAN HORROR CLASSIC, "SUDDENLY IN THE DARK" ON VALENTINE'S DAY!

Mondo Macabro has been instrumental in introducing yours truly to some truly batshit insane films like MSYTICS IN BALI and LADY TERMINATOR! And once again, they're doing us fans of international cinematic oddities a solid by giving SUDDENLY IN THE DARK a new lease on life!

Synopsis: A woman's idyllic middle-class life is disrupted when her husband brings home a beautiful young orphan to be their maid. At first she welcomes the pretty girl, in fact seems strangely fixated on her, but soon comes to suspect the girl of having an affair with her husband.

At the same time odd, unexplained incidents - most involving the maid's mysterious wooden doll - begin to make her question her own sanity. Soon it all spirals out of control and the film climaxes in a fever pitch of sexual jealousy, murder, and supernatural vengeance, all set to a pounding synth score.

Extras:
SUDDENLY IN THE DARK has been lovingly restored (with the best available film elements procured from the Korean Film Archive) and is due out on Tuesday, February 14th! You can order your copy now from AMAZON, BULLMOOSE, DIABOLIK DVD, or directly from MONDO MACABRO!