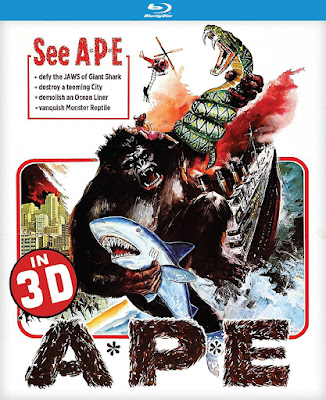 A*P*E is a hilariously awful, but I adore it! Featuring bargain basement special effects (which might actually look "better" in 3D), this low-budget Kong rip-off features a cheap gorilla costume, terrible miniatures, and the gut-bustingly funny desecration of a dead shark! It must be seen to be believed! (Man I wish I had a 3D TV so I could enjoy this in its intended format!)

Synopsis: A freighter peacefully glides the still waters of a soft Pacific night; their cargo: a recently captured 36-foot ape. A giant fist comes up through the deck sending the sailors sprawling and in a matter of seconds, the A*P*E (Attacking Primate monster) is loose!

The mighty A*P*E defies the JAWS of the Great White Shark, and then wades ashore and explores the Korean mainland. Meanwhile, American actress (Joanna Kerns, TV’s Growing Pains) arrives in South Korea to appear in a film, at the same time, A*P*E has also arrived and lays waste the city of Inchon and continues his march forward, destroying everything in his path. Paul Leder (I DISMEMBER MAMA) co-wrote and directed this cult classic which also co-stars Hollywood veteran Alex Nicol (THE MAN FROM LARAMIE, THE SCREAMING SKULL)!

Extras:
A*P*E will be available wherever Blu-ray discs are sold on Tuesday, February 28th and will cost around twenty bucks. Order it today from AMAZON, BULLMOOSE, or DIABOLIK DVD! Also, if you plan on watching this in 3D, make sure that you already have a 3D Blu-ray player and TV!