This March, Scream Factory wants to teach you a LESSON you'll never forget! 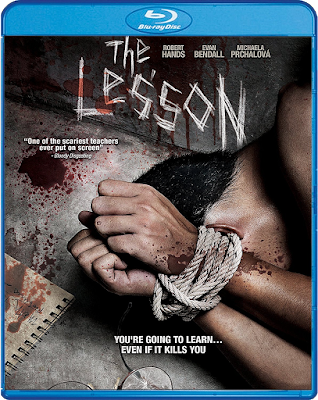 Along with delivering quality releases of classic Horror, Cult, and Exploitation cinema, Scream Factory also continues to bring fans new genre titles from around the world! Case in point is Ruth Platt's THE LESSON, an intense-looking thriller from "across the pond!"

Synopsis: Fin (Evan Bendall), a lone teen from a broken family, gets caught up with "the wrong crowd" of delinquent kids in this chilling horror film filled with white-knuckle suspense. When Fin and his friend, Joel (Rory Coltart) act up in class, their English teacher, Mr. Gale, (Robert Hands, STONHEARST ASYLUM) decides to teach them a lesson they will never forget.

First-time feature helmer Ruth Platt "comes out swinging as an intelligent directorial force with this debut" (DreadCentral.com) that "ramps up the tension dramatically and results in a solid horror coming-of-age film that features one of the scariest teachers ever put on screen" (Bloody-Disgusting.com)!

Extras:
THE LESSON will be available wherever Blu-rays are sold on Tuesday, March 7th. You can order yourself a copy today from AMAZON, BULLMOOSE, or directly from SHOUT! FACTORY's online store. This film will also be available on DVD, digital HD, and VOD!