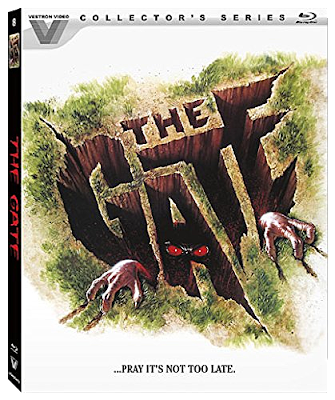 I unabashedly love THE GATE. Growing up, it was one of my favorite Horror movies (probably because it involved kids fighting against a supernatural evil), and I'm amazed at  how well the film's effects still hold up. So you can imagine how excited I was when this film was announced as part of the Vestron Collector's Series! Now, within days I will be able to enjoy this film in high-definition, with hours of extras covering every facet of its production! JOY!

Synopsis: When best friends Glen (Stephen Dorff) and Terry (Louis Tripp) stumble across a mysterious crystalline rock in Glen's backyard, they quickly dig up the newly sodden lawn searching for more precious stones. Instead, they unearth THE GATE — an underground chamber of terrifying demonic evil. The youngsters soon understand what forces they've unleashed, as they are overcome with an assortment of horrific experiences. With fiendish followers invading suburbia, it's now up to the kids to discover the secret that can lock The Gate forever . . . if it's not already too late!

Extras:
If you're a fan of THE GATE, and you already own the previous DVD release from Lionsgate, I think it's safe to say that you can part with it and upgrade to this release! The cover art is better, the film has been remastered, and there are more special features than ever before! THE GATE comes out on Tuesday, February 28th and is available to buy at AMAZON, BULLMOOSE, and DIABOLIK DVD! If you shop around, you may get a decent price, but don't be shocked if you see this disc going for thirty dollars or more!