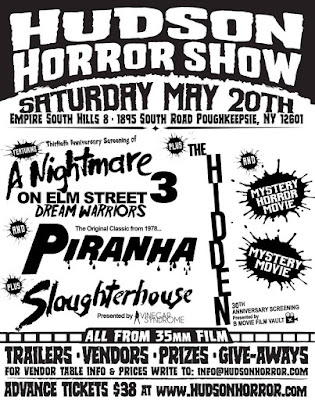 ON SATURDAY, MAY 20TH, HUDSON HORROR SHOW RETURNS TO ITS OLD STOMPING GROUNDS FOR TWELVE HOURS OF 35MM MADNESS!

Just when you think that Chris Alo and friends cannot top the lineups of previous Hudson Horror events, they up the ante yet again! Gaze in wide wonder at the killer lineup of films being screened in 35mm at Hudson Horror Show XV, save the date, and snap up tickets as soon as they go on sale, because this event WILL SELL OUT! For more details on the films and tickets, read the official press release below and get excited!

"Welcome to prime-time bitches, it's Hudson Horror Show #15! It’s been a long time coming, but our next show is locked and loaded and will take place on Saturday May 20th, 2017 at our home, the South Hills Cinema 8 in Poughkeepsie, NY. Tickets are just $38.00 in advance (only available at www.hudsonhorror.com), and will go on sale at approximately 10AM on this Sunday, February 26th. So what are we showing?? You wanna know, don’t you?

We’ll start off with not one but TWO MYSTERY MOVIES!! One is actually a MYSTERY MOVIE and the other is a MYSTERY HORROR MOVIE. (See what we did there?) No real clues yet, but let’s just say that even though one of them isn’t a horror movie, that doesn’t mean it’s not incredibly bloody and violent!

Our buds at the world’s best home video label Vinegar Syndrome are proud to present a rare 35mm screening of SLAUGHTERHOUSE! This late 80’s slasher is grimy and gruesome, but still so much fun. Just missing the slasher craze by a few years, if you’ve never seen this flick before, now is your chance to see it on the big screen.


The maniacal Jordan G from The B-Movie Film Vault is out of the asylum once again, and this time is sponsoring a 30th anniversary screening of THE HIDDEN! This sci-fi horror cult classic is a true roller coaster ride and only Jordan is crazy enough to bring it to you!


Just when you thought it was safe to go back in the water, you still get nibbled to death by the frenzy that is PIRANHA! Joe Dante’s 1978 classic is one of the most requested titles by you, the Hudson Horror audience. With a cast that includes Kevin McCarthy, Barbara Steele and that guy Dick Miller, PIRANHA is a movie that you will just eat up!


Lastly, but not least, we are equally looking forward to a 30th anniversary screening of A NIGHTMARE ON ELM STREET 3: DREAM WARRIORS! One of the most popular entries in the famed franchise, we’ll be laughing along to Freddy’s dated puns almost as much as we are rockin’ to Dokken!


As usual, lobbies at the theater will be packed to the gills with vendors selling t-shirts, DVDs, Blu-rays, toys, posters and so much more. Interested in being a vendor? Got a question? Send an email chris@hudsonhorror.com. Tickets are not needed to shop the vendor’s area, but you WILL need a ticket to watch the movies. And yeah, you will need to decide before purchasing your tickets which screening room you want to sit in (Theater #1 or Theater #6). Both rooms get the same movies, just in a slightly different order.

Again, tickets go on sale at 10AM this Sunday February 26th at www.hudsonhorror.com. Get them before they are gone! And we’ll see you on May 20th in Poughkeepsie for Hudson Horror Show #15!"