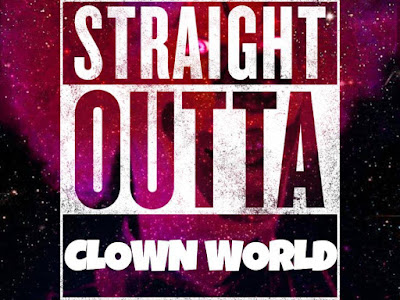 Several weeks ago, I noticed a new indie flick called SPACE CLOWN while I was typing up one of my weekly "Stock Your Vault" posts, but I didn't pay it any mind. Fast forward to today where I received an unexpected e-mail from an old friend of mine who actually wrote and performed the theme song for the movie! Pretty crazy eh?

So without further ado, here is the extremely catchy rap theme for SPACE CLOWN, by the one and only BRBRCK! If you enjoy it (and I think you will), you can listen to it for free on Sound Cloud and Spotify, or purchase it (for 99 cents) on iTunes or Apple Music. Enjoy!

ABOUT SPACE CLOWN
Synopsis: Poor Graham (writer/director Graham Skipper - BEYOND THE GATES, THE MIND'S EYE, ALMOST HUMAN) is a hapless filmmaker that finds himself besieged by an extraterrestrial clown who is looking to return to its home planet. The only catch? The clown's spaceship is fueled by human meat! Come for the jokes, and stay for the murder in this no-budget Horror-Comedy distributed by Wild Eye Releasing!

ABOUT BRBRCK
Mike Berberich (BRBRCK) is a genre-bending hip-hop songwriter based in Brooklyn, New York, where he writes and produces all of his own music. His live shows are an explosion of energy, with a full band backing the MC as he weaves his witty sense of humor through a nonstop barrage of spitfire wordplay and brass-knuckle punchlines. He has collaborated with a diverse group of artists, including jazz bassist Felix Pastorius, Anna Morsett of "The Still Tide," and dozens of local musicians, MCs, and producers. BRBRCK released his second full-length album, “BACKSTAGE” in June, 2016.

Thanks for the tip Mike and thanks for helping to bring back the time-honored tradition of cinematic theme songs! You (BRB)Rock! For more awesome Horror movie theme songs (rap, heavy metal, and otherwise) be sure to check out The Vault Master's list of Top Ten Horror Movie Theme Songs!