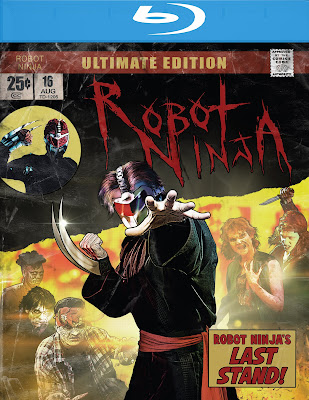 J.R. BOOKWALTER'S VIGILANTE SUPERHERO SHOCKER COMES TO BLU-RAY WITH A 2K TRANSFER AND LOADS OF EXTRAS!

I was extremely saddened to hear that Tempe Entertainment was closing its doors after thirty-three years of creating (and distributing) independent films! As the final curtain draws on Tempe, J.R. Bookwalter has given his long-forgotten ROBOT NINJA a Blu-ray release to be proud of! I myself haven't seen this one since its VHS debut, so I'm pretty curious to see how good it looks in HD! Let's take a closer look at Tempe's final big Blu-ray Vault Dwellers!

Synopsis: Late one night, frustrated comic book artist Leonard Miller witnesses the brutal rape and murder of a young couple at the hands of ruthless small-town thugs. Seeking vigilante justice, Miller decides to become his most famous character, stalking the night intent on spilling the blood of any criminal who stands in his way! Written, produced, and directed by J.R. Bookwalter (THE DEAD NEXT DOOR, OZONE), ROBOT NINJA slashes, stabs, guts, pokes, and jabs its way to a climactic finale, putting a unique imprint on the superhero genre. 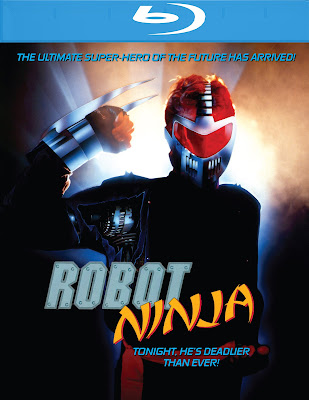 PACKAGING
Holy cow! Tempe's Ultimate Edition of ROBOT NINJA truly lives up to expectations! Featuring two cuts of the film and oodles of extras, I think the entire package totally warrants the $34.99 pricetag! You can order ROBOT NINJA on Blu-ray directly from Tempe HERE - it is set to ship out on April 2, 2019! But wait: There's MORE! You can also pick up ROBOT NINJA on DVD, order its SOUNDTRACK, or get it on LIMITED EDITION VHS!