More Than One Wears the Mask in the Spectacular SPIDER-MAN: ENTER THE SPIDER-VERSE! 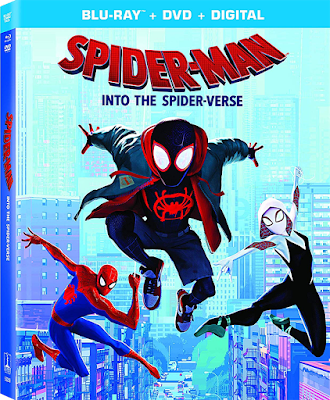 OWN ONE OF THE GREATEST SUPERHERO FILMS OF ALL TIME ON BLU-RAY OR 4K ULTRA HD BLU-RAY DISC!

I so very much wanted to see this film on the big screen last year, but never made it. I finally did get to see it last week and WOW.... is it amazing! SPIDER-MAN: INTO THE SPIDER-VERSE is a dream film for fans of the character, and delivers a great story with an awesome voice-cast, wonderful animation, and a lot of heart! This Spider-Man adventure comes highly recommended Vault Dwellers, and I can't wait to add it to my collection!

Synopsis: When the Kingpin's experimental collider tears the fabric of multiple realities, young Miles Morales crosses paths with Webheads from other dimensions! With the aid of Spider-Man (Jake Johnson), Spider-Gwen (Hailee Steinfeld), Spider-Man Noir (Nicholas Cage), Peni Parker (Kimiko Glenn), and the cartoonish Spider-Ham (John Mulaney), Miles learns what it means to be hero, and steps up to save his reality and return his newfound friends to their own!