THE GREASY STRANGLER is Getting a Blu-ray Rerelease in Late March from Filmrise. 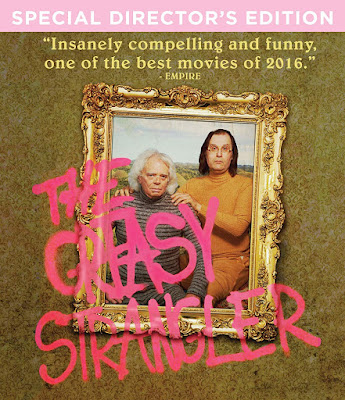 ON MARCH 26TH, "THE GREASY STRANGLER" MAKES ITS TRIUMPHANT RETURN TO BLU-RAY DISC!

I've never seen this bizarro movie before (it's on my "movies I'll get around to some day" list) but I've heard plenty about it. And I know: THE GREASY STRANGLER already came to Blu-ray back in 2016, but that release was a "made on demand" disc - this one is a legit pressed Blu-ray disc (and a lot cheaper to boot)!

Synopsis: "Hootie Tootie Disco Cutie!" When Big Ronnie and his son Brayden meet female tourist Janet on Big Ronnie's Disco Walking Tour - the best and only disco walking tour in the city - a fight for Janet's heart erupts between father and son, and the infamous Greasy Strangler is unleashed.

Extras:
Filmrise's "new" Blu of THE GREASY STRANGLER will be released on Tuesday, March 26th and should cost between $17 - $20. Order yourself a copy from AMAZON or BULL MOOSE today!