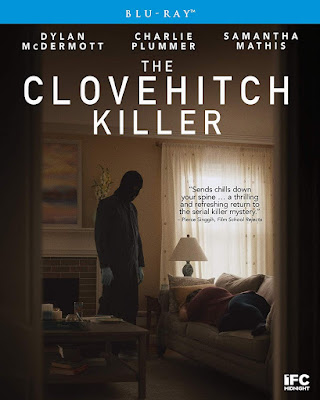 NOW AVAILABLE ON BLU-RAY: THE CLOVEHITCH KILLER, WELCOME TO MERCY, AND A COLLECTOR'S EDITION OF KALIFORNIA!

I've been meaning to see THE CLOVEHITCH KILLER ever since I saw the trailer (seems like it'd make a kick-ass double feature with SUMMER OF '84!), and I'm willing to give WELCOME TO MERCY a shot as well. (Is it me or have IFC Midnight's offerings greatly improved over the past few years?) KALIFORNIA is a movie that's been on my radar for a while, but typically, I still haven't gotten around to seeing it yet. I suppose I'll have to pick up all of these new titles and give them all a whirl in the near future!

Synopsis: A shocking revelation turns a teenage boy’s world upside-down in this chilling look at the evil that can lurk below even the most wholesome surface.

Tyler Burnside (Charlie Plummer - ALL THE MONEY IN THE WORLD) is a Boy Scout, a volunteer at his local church, and the dutiful son of an upstanding, community leader dad (Dylan McDermott - American Horror Story). Only one thing troubles the quiet Kentucky town he lives in: the unsolved murders — in which ten women were brutally tortured and killed by a psychopath known as Clovehitch — that rocked the community more than a decade ago. When Tyler discovers a cache of disturbing images in his father's possession, he begins to suspect that the man he trusts most in the world may be Clovehitch … and that his deadly rampage may not be over. With unrelenting tension, director Duncan Skiles crafts a picture-perfect vision of the American family … and then rips it to shreds.

Extras:
THE CLOVEHITCH KILLER is currently available (on DVD & Blu-ray) and should cost you between $18 - $23. Get it now from AMAZON, BULL MOOSE, DIABOLIK DVD, or directly from SHOUT! FACTORY. 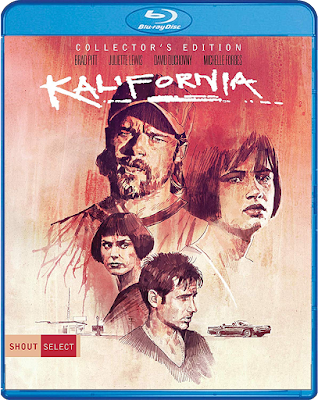 When urban intellectuals Brian (Duchovny) and Carrie (Forbes) set out on a cross-country trip to research a book about serial killers, they share the ride with a couple they barely know — Early Grayce (Pitt) and his girlfriend Adele (Lewis). Locked in a car hurtling westward, the four travelers struggle to find some common ground. But when they finally do connect, Early's violent nature abruptly emerges and the terrified Brian and Carrie realize that they don’t need to go very far to learn about ruthless killers ... because they are already face-to-face with one!

Extras:
Shout Select's Collector's Edition of KALIFORNIA is currently available wherever Blu-ray discs are sold and should cost between $26 - $32. Order a copy of this thriller now from AMAZON, BULL MOOSE, DIABOLIK DVD, or directly from SHOUT! FACTORY. 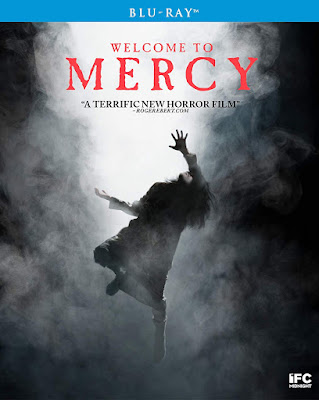 Synopsis: A young woman struggles against the unholy forces that possess her in this terrifying occult thriller! After being stricken with stigmata, single mother Madaline (Kristen Ruhlin) is sent to a remote convent where nothing is what it seems and her friend August (Lily Newmark) is seemingly the only person she can trust.Together, they must confront the demons inside Madaline before she becomes the Antichrist!

Extras:
WELCOME TO MERCY is now available on Blu-ray (and DVD) and costs between $18 - $19. Order it now from AMAZON, BULL MOOSE, DIABOLIK DVD, or directly from SHOUT! FACTORY.