On February 25th, PET SEMATARY TWO Claws Its Way Out of a Shallow Grave and Onto Blu-ray Disc! 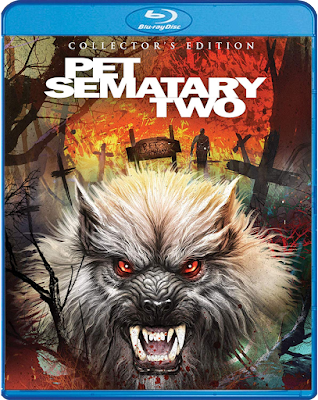 Growing up, I had a fascination with the written works of Stephen King, and the film adaptations that resulted from them. So when PET SEMATARY TWO suddenly appeared one day on the shelves at a local Blockbuster Video, I was psyched!

But despite being directed by Mary Lambert (who previously directed the original PET SEMATARY) and having an amazing cast (which included post-TERMINATOR 2: JUDGMENT DAY Edward Furlong, the REVENGE OF THE NERDS series' Anthony Edwards, and "The Kurgan" himself, Clancy Brown!), this film just never clicked with me, and I still have yet to revisit it nearly three decades later. That being said, Scream Factory really went all-in on this release, so maybe PET SEMATARY TWO is worth giving another chance?

Synopsis: Sometimes dead is better. But the shocking terror that plagued Ludlow, Maine, in Pet Sematary is still very much alive in this sequel to the 1989 hit film.

After the death of his wife, veterinarian Chase Matthews (Anthony Edwards - ZODIAC) and his 13-year-old son, Jeff (Edward Furlong - TERMINATOR: DARK FATE), move to Ludlow to rebuild their lives. Antagonized by the neighborhood kids, Jeff befriends another outsider, Drew Gilbert, who lives in fear of his cruel stepfather, Gus (Clancy Brown - JOHN DIES AT THE END). After Gus cold-bloodedly shoots Drew's beloved dog, the boys bury the body in the local Indian burial grounds – a place rumored to have the powers of resurrection. But when evil is awakened, the boys realize that sometimes you should just let dead dogs lie.

Extras:
Scream Factory's awesome Collector's Edition Blu-ray of PET SEMATARY TWO will be available at all Blu-ray retailers on Tuesday, February 25th and should cost between $25 - $29! Whether you're a fan of the film, or just a completionist, order a copy today from AMAZON, BULL MOOSE, DIABOLIK DVD, or directly from SHOUT! FACTORY (which will net you an 18 x 24 poster featuring the new cover art while supplies last)!