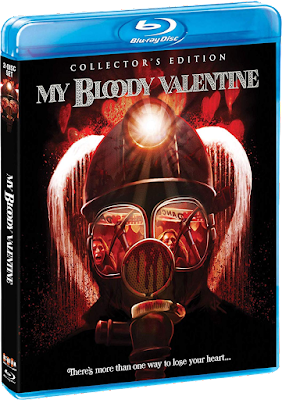 SCREAM FACTORY GOES ALL OUT WITH THEIR 2-DISC COLLECTOR'S EDITION OF GEORGE MIHALKA'S CLASSIC SLASHER - OWN IT ON FEBRUARY 11TH!

I grew up on a steady diet of heavily-edited slasher films when I was a kid, and typically gravitated toward the usual suspects. (i.e. Michael Meyers, Jason Voorhees, Freddy Krueger, Leatherface, etc.) I eventually got out of my slasher comfort zone in my early teens, and finally got to see many classics in their R-rated glory, while also discovering numerous non-franchise slasher gems like MY BLOODY VALENTINE! This film in particular became an instant favorite, and I was filled with excitement when Lionsgate released it to Blu-ray back in 2009 with various gory bits edited back into the movie! With a new HD transfer, restored footage (thought lost for many years), and new extras, clearly there was no way anyone could top that long out of print Blu-ray release.... UNTIL NOW.

Synopsis: On Valentine's Day, someone always loses their heart. Twenty years ago, this small town lost more than that. When supervisors abandoned their posts to attend the town's annual holiday dance, a tragedy claimed the lives of five miners. The sole survivor, Harry Warden, was institutionalized, but returned for a vengeful massacre on the disaster's first anniversary.

Nineteen years later, the town is gearing up for another Valentine's Day party. Teen sweethearts T.J. and Sarah, along with their friend Axel, are among the excited partygoers. But when a box of candy containing an eerie warning and blood-soaked heart arrive, the townsfolk realize that romance is as good as dead. And so are they ...

Extras:
DISC ONE (THEATRICAL VERSION OF THE FILM)

DELUXE LIMITED EDITION EXTRAS
Though it is a little more expensive, buying MY BLOODY VALENTINE directly from Shout! Factory's online store will net you some collectible items that cannot be procured from any other retailer. Here's what you get with Scream Factory's exclusive package: 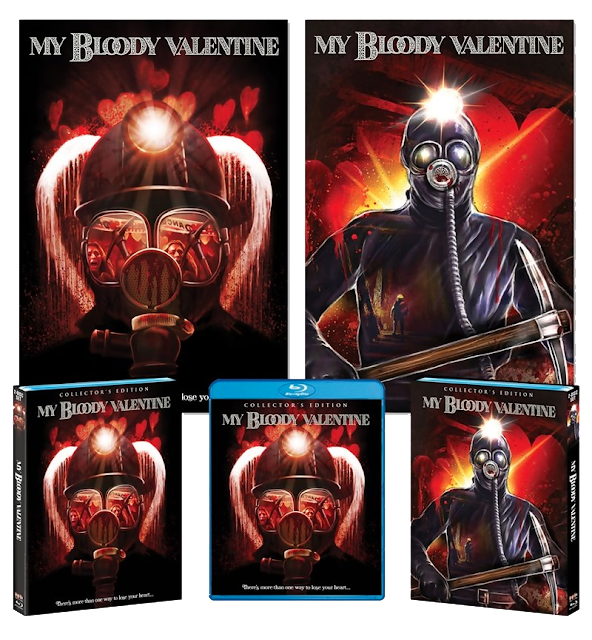 Boasting an incredible new transfer and tons of new extras, Scream Factory's impressive Collector's Edition of MY BLOODY VALENTINE will be mine when it is released on Tuesday, February 11th! If you buy this release from SHOUT! FACTORY (for approximately $35), you get two 18 x 24 posters and two slipcovers (pictured above) while supplies last! However, if you just want the movie by itself, you can snag it for $28 from AMAZON, BULL MOOSE, or DIABOLIK DVD!