On January 21st, Own the Definitive Release of Lucio Fulci's HOUSE BY THE CEMETERY! 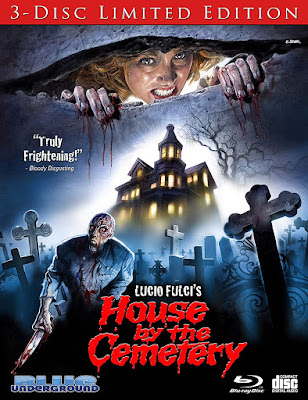 Out of all the Italian Horror filmmakers that were cranking out movies in the 70s and 80s, I always liked Lucio Fulci the best. I enjoyed the bold absurdity of ZOMBI 2's shark vs. zombie sequence, and gawked at the gore in THE BEYOND and CITY OF THE LIVING DEAD (aka GATES OF HELL) while I tried to figure out just what the hell was going on! And though it isn't my favorite of Fulci's "Gates of Hell trilogy" (though it does have quite a memorable bat attack) I am quite glad to see HOUSE BY THE CEMETERY get the royal treatment from Blue Underground! Boasting a new 4K restoration from the original camera negative, plus new special features and other goodies, this 3-Disc release is easily a must-have for fans of Italian Horror cinema!

Synopsis: A young family moves from their cramped New York City apartment to a spacious new home in New England. But this is no ordinary house in the country: the previous owner was the deranged Dr. Freudstein, whose monstrous human experiments have left a legacy of bloody mayhem. Now, someone-or something-is alive in the basement, and home sweet home is about to become a horrific hell on earth.

Extras:
DISC ONE (THE FILM)

ADDITIONAL FEATURES
Blue Underground's fantastic 3-Disc set of HOUSE BY THE CEMETERY will be available on Tuesday, January 21st wherever Blu-ray discs are sold, and should cost between $32 - $50! If you are a Fulci fan, or just enjoy classic Italian Horror, you need to pick up a copy of this release as soon as possible from AMAZON, BULL MOOSE, DIABOLIK DVD, or direct from BLUE UNDERGROUND!