DEMONS OF THE MIND and THE MUMMY'S SHROUD Make Their North American Blu-ray Debuts on January 14th! 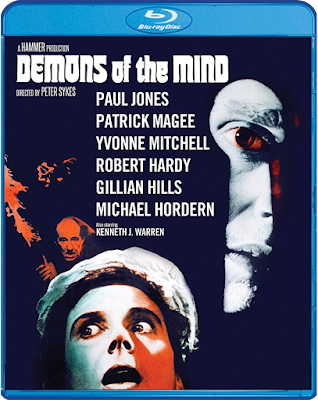 I never quite got around to exploring Hammer's impressive catalog of horror titles, other than the films containing Christopher Lee's Dracula, or Peter Cushing's Dr. Frankenstein, and I've always kind of regretted that.

Thankfully they are working hard to fill that void by releasing numerous Hammer films to Blu-ray, including this week's two newest releases: DEMONS OF THE MIND and THE MUMMY'S SHROUD! Both films make their Region A Blu-ray debuts with new audio commentaries - if you are a fan of Hammer flicks you need to pick these discs!

Synopsis: In the 19th century, a depraved baron confronts a hereditary curse by imprisoning his two adult children in the family castle. When a nearby village is plagued by a series of murders, the killings trigger a mass hysteria of rituals and sadistic desires. Can these "demons" be destroyed by a power beyond madness ... or will a final onslaught of evil forever torment this land?

Patrick Magee (A CLOCKWORK ORANGE) and Paul Jones (lead singer of the band Manfred Mann) co-star in this psychological shocker from the director of TO THE DEVIL... A DAUGHTER that many Hammer fans consider to be one of the studio's most offbeat and unique horror thrillers ever!

Extras:
Scream Factory's DEMONS OF THE MIND Blu-ray will be available on Tuesday, January 14th and should cost between $20 - $23! Order a copy today from AMAZON, BULL MOOSE, DIABOLIK DVD, or directly from SHOUT! FACTORY. 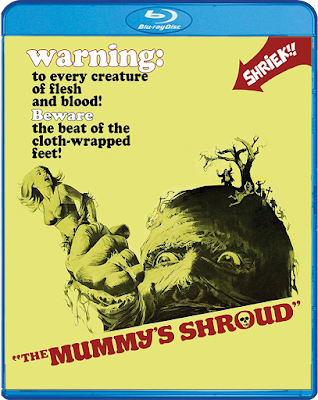 Synopsis: IT LIVES AGAIN! A small archaeological party headed by Sir Basil Walden (Andre Morell - THE PLAGUE OF THE ZOMBIES) discovers the hidden tomb of Kah-to-Bey.

Despite the warning from the guardian, Hasmid, they take Kah-to-Bey to Cairo and place him next to the mummy of Prem, his devoted slave and protector. The mystical hieroglyphic shroud that covers Kah-to-Bey's body is read aloud by Ali and restores Prem to life, resulting in an unstoppable progression of madness and murder.

Extras:
Scream Factory's new Blu-ray of THE MUMMY'S SHROUD arrives on January 14th and should cost between $20 - $23! Treat yourself to a copy today from AMAZON, BULL MOOSE, DIABOLIK DVD, or get it direct from SHOUT! FACTORY.