LET'S SCARE JESSICA TO DEATH With Some BODY PARTS at THE SLUMBER PARTY MASSACRE! I own the SLUMBER PARTY MASSACRE films on DVD and would like to eventually upgrade them to Blu-ray (i.e. when Parts II & III come back into print), and I'm definitely interested in scoping out LET'S SCARE JESSICA TO DEATH, but BODY PARTS is easily the Scream Factory release I'm most excited for. Written and directed by Eric Red (a screenwriter and filmmaker that doesn't get nearly enough praise) and featuring Jeff Fahey and Brad Dourif, this early 90s Horror flick has managed to evade me for decades! But now, thanks to Scream Factory's efforts, I will finally be able to watch this oft-overlooked classic in HD!

Synopsis: From Eric Red, the writer of THE HITCHER and NEAR DARK, comes this tale of a medical experiment gone very wrong.

Bill Chrushank is a criminal psychologist who loses his arm and nearly his life in a grisly car accident. A daring medical operation follows, in which a donor's arm is successfully grafted onto Bill's body. But after the operation, the arm starts to take on a violent life of its own, striking out against Bill's wife and children. Consumed by fears about his dangerous behavior, Bill is driven to learn the donor's identity – and makes a horrifying discovery that delivers him into a world of unimaginable terror. Written and directed by Eric Red (COHEN & TATE, BAD MOON), this thriller stars Jeff Fahey (ALITA: BATTLE ANGEL) and Brad Dourif (CHILD'S PLAY, GRAVEYARD SHIFT).

Extras:
Though it's a shame they couldn't snag interviews with Fahey or Dourif, the (over) two hours of special features on this disc more than make up for that! Scream Factory's Blu-ray of BODY PARTS is now available wherever Blu-ray discs are sold and should cost between $23 - $25! Order yourself a copy today from AMAZON, BULL MOOSE, DIABOLIK DVD, or directly from SHOUT! FACTORY. 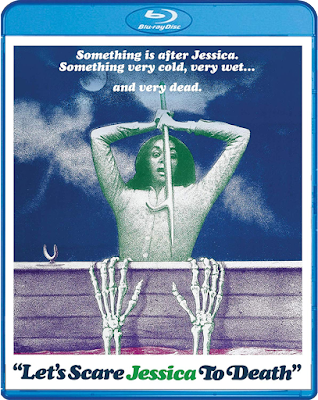 Synopsis: Released from an institution after suffering a nervous breakdown, Jessica (Zohra Lampert - THE EXORCIST III) seeks the tranquility of a secluded home in Connecticut to help make her recovery complete. But instead of a restful recuperation with her husband and close friend in the New England countryside, Jessica soon finds herself falling into a swirling vortex of madness and the supernatural!

And an even more unsettling discovery is that the entire region seems to be under the influence of a mysterious woman who has been living in the supposedly empty house. Jessica's fear and dread only intensify when she discovers that the "undead" girl, Emily, tragically drowned long ago, on her wedding day. Is she back to take vengeance?

Extras:
Scream Factory's LET'S SCARE JESSICA TO DEATH Blu is also now available at all Blu-ray retailers and should cost between $23 - $25! Order this title now from AMAZON, BULL MOOSE, DIABOLIK DVD, or directly from SHOUT! FACTORY. 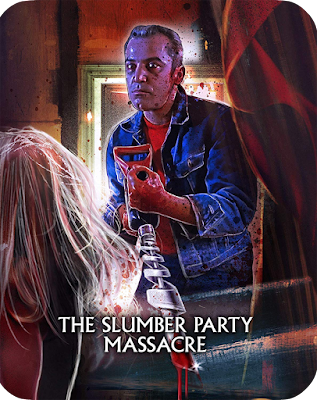 Synopsis: When Trish (Michele Michaels) decides to invite her high school basketball teammates over for a slumber party, she has no idea the night is going to end with an unexpected guest crashing the party – an escaped mental patient and his portable power drill – in the cult classic, THE SLUMBER PARTY MASSACRE! 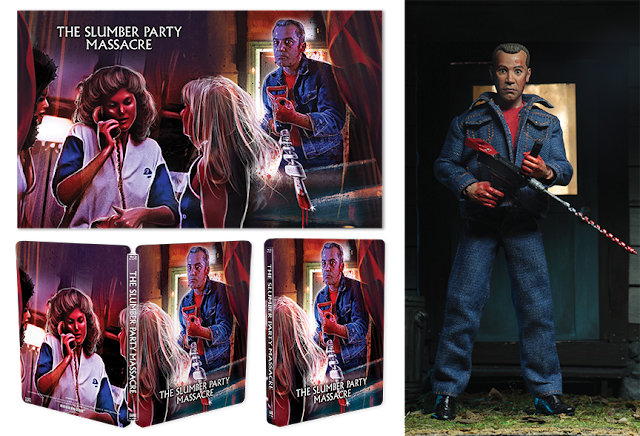 Limited Edition Exclusives:
Scream Factory's Limited Edition Steelbook of THE SLUMBER PARTY MASSACRE, with its groovy new artwork and new 4K transfer is now available and should cost between $18 - $20! This stand-alone release is readily available at AMAZON, BULL MOOSE, and DIABOLIK DVD! The Deluxe Limited Edition with the lithograph and collectible figure is $60 and is exclusive to SHOUT! FACTORY - order it now or forever lose out on that kick-ass Russ Thorn figure!