There Is Nothing Silent About Nights in Paddock County: EDGE OF THE AXE Comes to Blu-ray on January 26th! 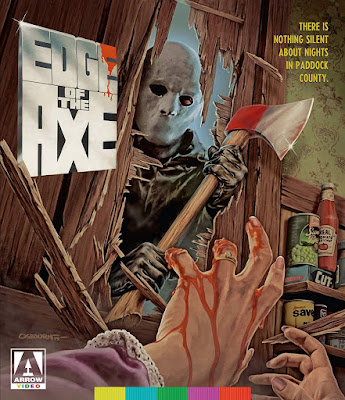 One of my favorite sub-genres of Horror has to be the slasher film. From the mighty franchises filled with increasingly ridiculous sequels (e.g. FRIDAY THE 13TH and HALLOWEEN), to the one hit wonders (e.g. THE BURNING, INTRUDER, MY BLOODY VALENTINE), I feel like I've seen just about all of them. Leave it to Arrow Video to burst my bubble with their recent announcement of EDGE OF THE AXE! I have never seen this Spanish slasher flick before (though I do vaguely recall seeing its minimalist VHS cover art at my local mom & pop video store back in the day), but the more I read about it, the more I need to see it! And once next week rolls around, I will finally have my chance to experience this rarely-mentioned slasher flick in startling HD clarity!

The rural community of Paddock County is being rocked by the crazed exploits of an axe-wielding psychopath, who stalks the night in a black trenchcoat and mask. As the victims pile up, the authorities attempt to keep a lid on the situation, whilst computer whizz-kid Gerald and girlfriend Lillian seek to unmask the killer before the town population reaches zero.

Nominally set in Northern California but shot primarily in Madrid, giving the film an off-kilter, American/European atmosphere akin to the likes of PIECES, Edge of the Axe is a late entry hack-and-slash masterpiece from one of the titans of Spanish terror. 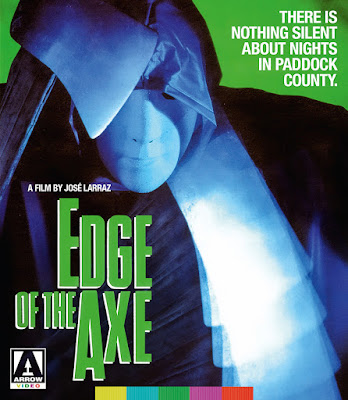 Hot damn that's a lot of love for a movie that most of us had forgotten about - good on Arrow Video for taking the time to give EDGE OF THE AXE a new lease on life! Speaking of which, their Blu-ray release of this title is scheduled for release on Tuesday, January 28th and should cost between $24 - $28! Take the leap of faith now fellow slasher film fans and get yourself a copy from AMAZON, BULL MOOSE, DIABOLIK DVD, or directly from ARROW VIDEO!