Now Available on Blu-ray: THE HELLBENDERS, KILL THEM ALL AND COME BACK ALONE, and THE SPECIALISTS! 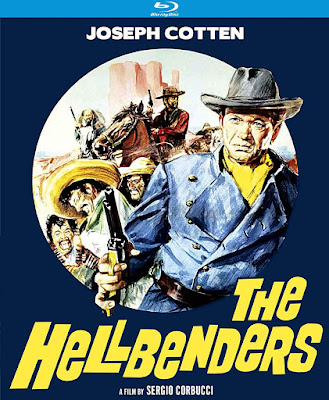 I've been absolutely enamored with Spaghetti Westerns ever since I first laid eyes upon Sergio Leone's ONCE UPON A TIME IN THE WEST so many years ago! It opened the floodgates, and soon after I watched Leone's MAN WITH NO NAME TRILOGY, the delightfully odd SABATA TRILOGY, the TRINITY films (starring Terrence Hill and Bud Spencer), DJANGO, and numerous others!

Truth be told, it has been some time since I delved into the Spaghetti Western sub-genre, but Kino Lorber's latest releases, which include THE HELLBENDERS and THE SPECIALISTS (both helmed by Sergio Corbucci, director of DJANGO and NAVAJO JOE) and KILL THEM ALL AND COME BACK ALONE (from THE LAST SHARK director Enzo G. Castellari) seem like a great way to jump back in! If you're as big a fan of "macaroni westerns" as I am, then continue reading to learn more about these Kino Lorber titles!

Synopsis: From Sergio Corbucci, the legendary director of DJANGO, NAVAJO JOE, THE GREAT SILENCE, and THE MERCENARY comes this classic spaghetti western starring screen icon Joseph Cotten (THE THIRD MAN, DUEL IN THE SUN, PORTRAIT OF JENNIE) as the fanatical patriarch of a family of ex-Confederate killers who, in order to finance an invasion of the North, massacres a Union Army convoy carrying a large shipment of money. But before the hell-bent clan can re-ignite the Civil War, they’ll have to smuggle a coffin crammed with the stolen loot across a frontier inflamed by lust, violence and extreme vengeance.

Norma Bengell (PLANET OF THE VAMPIRES), Aldo Sambrell (FOR A FEW DOLLARS MORE) and Al Mulock (THE GOOD, THE BAD, & THE UGLY) co-star in this fully restored western shocker—also known as THE CRUEL ONES. Featuring a classic score by renowned composer Ennio Morricone (A FISTFUL OF DOLLARS, THE HATEFUL EIGHT) and beautiful photography by celebrated cinematographer Enzo Barboni (MAN OF THE EAST, NIGHTMARE CASTLE).

Extras:
Kino Lorber's Special Edition Blu-ray of THE HELLBENDERS is readily available and should cost between $18 - $20! Order a copy now from AMAZON, BULL MOOSE, DIABOLIK DVD, or directly from KINO LORBER! 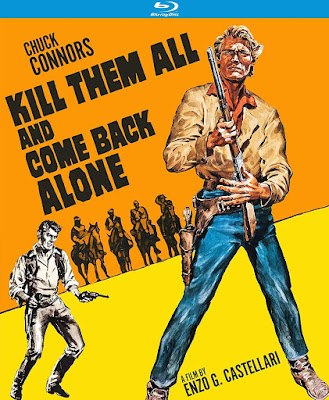 In 1864, mercenary Clyde McKay (Connors) leads a squad of tough-as-nails cutthroats on a mission for the Confederate high command to infiltrate an enemy fortress and steal millions in gold from the Union Army. Unfortunately, the crew he has assembled to pull off the heist is even less trustworthy than he is—and they all end up double-crossing each other. Frank Wolff (THE GREAT SILENCE, ONCE UPON A TIME IN THE WEST) and Franco Citti (ACCATTONE, THE DECAMERON) co-star in this fully restored, first-rate tale of betrayal and revenge.

Extras:
KILL THEM ALL AND COME BACK ALONE is available wherever Blu-ray discs are sold and should cost between $18 - $24! Get your copy now from AMAZON, BULL MOOSE, DIABOLIK DVD, or directly from KINO LORBER! 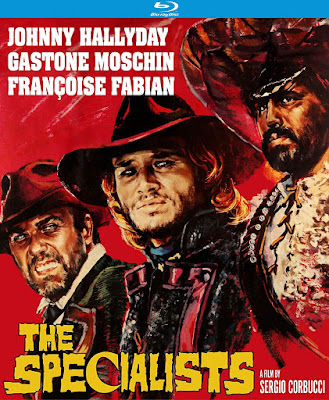 Synopsis: From legendary director Sergio Corbucci, comes this thrilling spaghetti western starring French music and film great Johnny Hallyday (THE MAN ON THE TRAIN, DETECTIVE, VENGEANCE). Notorious gunfighter Hud Dixon (Hallyday) arrives in Blackstone, a town where his brother was wrongfully accused of robbing a bank and lynched for it.

As Hud seeks revenge, he starts to discover the truth behind the stolen loot, and has to contend with an idealistic sheriff, a beautiful and seductive female banker, a corrupt businessman and a one-armed Mexican bandit, who was once his friend. Gastone Moschin (THE CONFORMIST, CALIBER 9) and Françoise Fabian (BELLE DE JOUR, MY NIGHT AT MAUD'S) co-star in this fully restored adventure-yarn gorgeously shot by Dario Di Palma (THE SEDUCTION OF MIMI, THE OLDEST PROFESSION).

Extras:
Kino's Blu-ray release of Sergio Corbucci's THE SPECIALISTS is now available and should cost between $18 - $24! Get yourself a copy today from AMAZON, BULL MOOSE, DIABOLIK DVD, or directly from KINO LORBER!