Get Poked by BRUCE'S DEADLY FINGERS on May 8th! 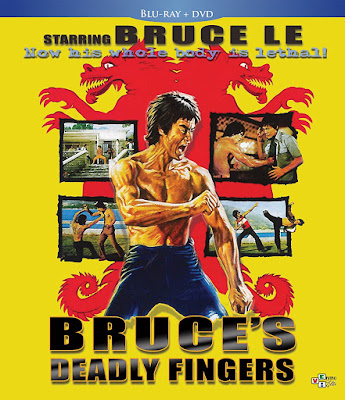 While I know of the the Brucesploitation sub-genre, I've honestly only seen a handful of films featuring faux Bruce Lee actors, which became all the rage after Lee died in 1973. Bruce Le was one of the more prominent Clones of Bruce Lee, and starred in several dozen films as a Lee knock-off, including BIG BOSS II, ENTER THE GAME OF DEATH, and BRUCE LE'S GREATEST REVENGE (aka WAY OF THE DRAGON 2)! Hopefully this proves to be a popular title and leads to more more Brucesploitation titles in high-definition!

Synopsis: After malicious gangsters capture Bruce Lee's ex-girlfriend, a young martial artist attempts to rescue her - and the late master's book containing lethal techniques for killing with one's fingers. BRUCE'S DEADLY FINGERS offers up plenty of Kung-fu action and mayhem, including a particularly gruesome scene involving the torture of a girl with a deadly snake!

Extras:
After several delays, VCI's Blu-ray of BRUCE'S DEADLY FINGERS will be available on Tuesday, May 8th! You can order yourself a copy of this Brucesploitation classic now at AMAZON, BULLMOOSE, or DIABOLIK DVD! For purists, there is a German Blu-ray release from Digidreams that contains both the U.S. cut and a longer uncut version. You can get it from AMAZON.DE if you feel so inclined.

Posted by The Vault Master at 1:55 AM