PREPARE TO GET RE-ANIMATED ON JUNE 6TH AS UMBRELLA UNVEILS THEIR THEIR "BEYOND GENRES" LABEL!

While May didn't have much to brag about, June is definitely a HUGE month for Umbrella Entertainment. They are finally unleashing the first batch of titles for their new "Beyond Genres" series, including RE-ANIMATOR (which comes with two different cuts of the film!) and its two sequels, BRIDE OF RE-ANIMATOR and BEYOND RE-ANIMATOR!

Also available on June 6th: Don Coscarelli's THE BEASTMASTER (now Region Free!) plus an Ozploitation Classic called PACIFIC BANANA! To learn more about these new releases and see all of the other new DVDs & Blu-rays coming from Umbrella in June, read onward!

ANNOUNCEMENTS:
* Umbrella's future Beyond Genres titles will include DAGON (07/04), THE QUIET EARTH, NEXT OF KIN, SPIRITS OF THE AIR - GREMLINS OF THE CLOUDS, THE NAVIGATOR: A MEDIEVAL ODYSSEY, and RAZORBACK (08/01)!

* Along with DAGON, Umbrella is also releasing ESCAPE FROM ABSALOM and THE ENDLESS in July! 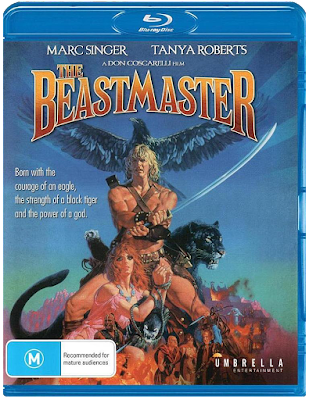 Synopsis: Don Coscarelli's (the PHANTASM series, BUBBA HO-TEP) cult sword and sorcery epic is a bold tale of witchcraft, spectacle, and revenge, where barbarians jostle for power and nature is a force to be reckoned with.

After his family is slaughtered by sinister lords of evil, an innocent boy carries his anger into manhood, vowing bloody vengeance. Armed with supernatural powers and the innate ability to communicate with animals, Dar (Marc Singer, Television's V-The Series) embarks on a journey to bring justice to the marauding forces of evil, lead by malevolent priest Maax (Rip Torn, MEN IN BLACK).


ORDER THE BEASTMASTER FROM
UMBRELLA ENTERTAINMENT OR AMAZON.COM! 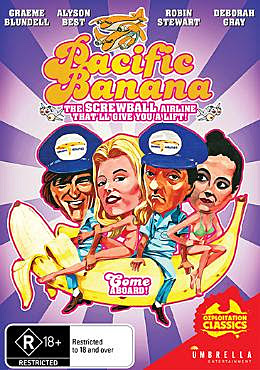 Synopsis: Martin (Graeme Blundell) has got a little problem that keeps getting bigger all the time... and the girls will go to any lengths to help him stand up for himself! 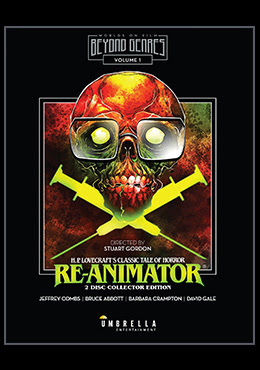 Synopsis: Adapted from H.P. Lovecraft’s sepulchral 1922 pulp horror story, arguably the first such tale to ever consider scientifically affected corpses as zombies, RE-ANIMATOR is Stuart Gordon’s cult classic trip into the realm of the living dead!

Conducting clandestine experiments within the morgue at Miskatonic University, scientist Herbert West (Jeffrey Combs, FROM BEYOND, THE FRIGHTENERS) reveals to fellow graduate student Dan Cain (Bruce Abbott) his groundbreaking work concerning the re-animation of fresh corpses. West’s secret reagent is a powerful injection with the capacity to give life where there is none – destined to capture the imagination of the entire scientific community.

However, between life and death is a thin thread of understanding and when obsession gets the better of West, there is no stopping his wicked ways – dead or alive! Presented complete and uncut in gore-glistening HD, RE-ANIMATOR is a true gore-fest of mortal manipulation in the most demented sense! 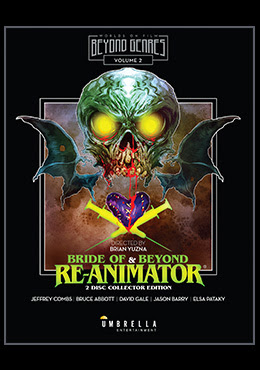 It's been eight months since the Miskatonic Massacre stained the halls with blood - and Dr. West and Dr. Cain's experiments have taken a bizarre turn. Now they have gone beyond re-animating the dead... into the realm of creating new life!

The legs of a hooker and the womb of a virgin are joined to the heart of Dr. Cain's dead girlfriend - and the bride is unleashed upon her mate in a climax of sensual horror.

BEYOND RE-ANIMATOR Synopsis: When he was young, Howard Phillips (Jason Barry) watched his sister get torn apart by one of Dr. Herbert West's (Jeffrey Combs) reanimated corpses. Phillips, now a doctor, is so eager to learn more about the mad doctor's attempts to bring back the dead that he accepts a position at the prison where West is being held. Phillips delves further into West's gruesome research, which attracts the attention of a local reporter (Elsa Pataky) and the cruel prison warden (Simón Andreu).

DISC ONE (BRIDE OF RE-ANIMATOR - 96 MINUTES)

As usual, all of the DVDs and mentioned in this post can be ordered directly from UMBRELLA ENTERTAINMENT, and are (typically) Region Free!

Posted by The Vault Master at 1:23 AM