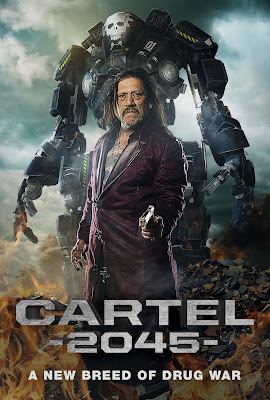 THE DRUG WARS HEAT UP WHEN KILLER ROBOTS ARE ADDED INTO THE MIX, IN CHRIS LE'S "CARTEL 2045!"

Set in a not-too-distant future when drug wars have ravaged the borderlands between The United States and Mexico, CARTEL 2045 is now available on various Video on Demand platforms! Featuring robotic enforcers led by drug lord Danny Trejo, this million dollar Sci-Fi Actioner appears to have taken some inspiration from films like ESCAPE FROM NEW YORK and CHAPPIE!

Synopsis: The year is 2045, the continuing drug war has caused havoc between The United States and Mexico. Gear Side International, a robotics engineering company on the brink of bankruptcy, sells off their technology to the Cartel on the black market. With the advanced military robotics technology in the wrong hands the cartel uses it to their advantage; replacing their enforcers, hit men, and soldiers.

CARTEL 2045 is now currently available to stream on various On Demand services including AMAZON INSTANT VIDEO and will get a DVD release later this year!

Posted by The Vault Master at 2:15 AM