The Last Release of THE LAST HOUSE ON THE LEFT You'll Ever Need is Coming to Blu-ray on July 3rd! 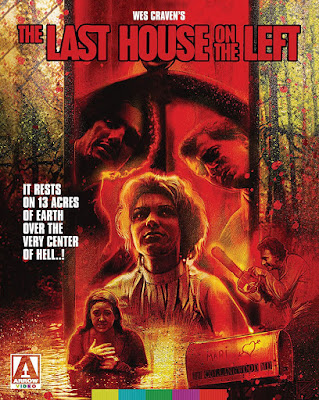 ARROW VIDEO'S LIMITED EDITION BLU-RAY OF WES CRAVEN'S CONTROVERSIAL DIRECTORIAL DEBUT IS THE DEFINITIVE EDITION WE'VE ALL BEEN WAITING FOR!

Back when I was a flourishing young Horror fan, I began to work my way through the earlier films of Wes Craven after I had my fill of the NIGHTMARE ON ELM STREET franchise. I distinctly remember my shocked reactions as I watched THE LAST HOUSE ON THE LEFT for the first time, and gazed wide-eyed as Krug & The Gang did terrible things to a pair of young girls, before getting their comeuppance in the film's final act.

And now, thanks to Arrow Video, I can revisit this film in HD with THREE different cuts of the movie, plus a plethora of awesome extras! Though the price is a bit steep, methinks it is time to upgrade from my old MGM DVD release of this Wes Craven classic!

Synopsis: The directorial debut of Wes Craven, the man behind such horror favorites as A NIGHTMARE ON ELM STREET, THE HILLS HAVE EYES, SWAMP THING, and SCREAM, THE LAST HOUSE ON THE LEFT justly retains its reputation as one of the most harrowing cinematic experiences of all time, nearly half a century on from its original release.

On the eve of her 17th birthday, Mari and friend Phyllis set off from her family home to the big city to attend a concert by shock-rockers Bloodlust. Attempting to pick up some marijuana on the way, the pair run afoul of a group of vicious crooks, headed up by the sadistic and depraved Krug (David Hess). Gagged and bound, the young women are bundled into a car trunk and driven to the woods, where the gang subject them to a terrifying ordeal of sexual humiliation, torture, and murder.

Unleashed on an unsuspecting public in 1972, THE LAST HOUSE ON THE LEFT shocked audiences with its graphic and unflinching portrayal of interpersonal violence, paving the way for a whole host of cheap imitators looking to capitalize on its success. It is Wes Craven's original alone, however, that remains one of the true watershed moments in horror (and indeed, film) history.

Arrow Video's must-own limited edition release of THE LAST HOUSE ON THE LEFT will be available on Tuesday, July 3rd, and retails for $31 - $35! You can order it today from AMAZON, BULLMOOSE, or DIABOLIK DVD, but hurry because this title will probably sell out fast! If it does, you'll have to wait until later this year for the Special Edition release which will not contain the second disc!