More Charles Bronson is always a good thing and Umbrella Entertainment has delivered unto us the much-needed (for our collections) DEATH WISH sequels that we've been missing. Sadly, this is pretty much the only new release that we'll be covering this month as the rest of Umbrella's slate is made up of more normal fare. Those titles will be listed at the bottom of this post, as we typically do here at The Vault.

ANNOUNCEMENTS:
* Umbrella is unveiling their new BEYOND GENRES line next month (06/06), and kickstarting it with awesome new editions of DAGON, RE-ANIMATOR (which will contain the Integral Cut), as well as its two sequels, BRIDE OF RE-ANIMATOR and BEYOND RE-ANIMATOR.

* They are also bringing THE BEASTMASTER to Blu-ray on June 6th! The disc will have an audio commentary with director Don Coscarelli and an hour-long making-of featurette!

* RAZORBACK is going to be part of Umbrella's BEYOND GENRES line - still no release date, but I'm thinking August at the latest! 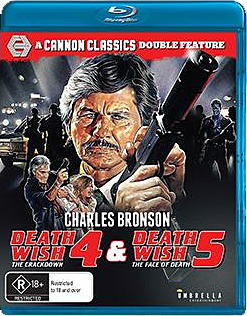 With the tragic cocaine-induced death of his girlfriend's teenage daughter Kersey steps into the breach and faces-off against two rival drug gangs waging war in the blood-drenched inner city.

Even at the best of times the streets of LA are never safe - run by pimps and ruthless drug traffickers, they remain a melting-pot of crime and violence. But when original urban vigilante and one-man justice machine Paul Kersey reaches into his extensive arsenal of weapons to take check, it's time to run for cover.


DEATH WISH 5 Synopsis: After battling on the streets in cities from coast to coast, vigilante Paul Kersey has moved back to New York. But when his beautiful fiancee, Olivia (Lesley-Anne Down), is killed and her daughter kidnapped by a kingpin of the underworld, Kersey finds himself back in the war.

Kersey's plan to live anonymously is shattered when he learns that his fiancee was the victim of a protection racket run by her ex-husband, criminal Tommy O'Sheay. One by one Kersey hunts down the criminals. Once again upholding the law becomes his way of life... And this time it's for good.

Posted by The Vault Master at 1:01 PM