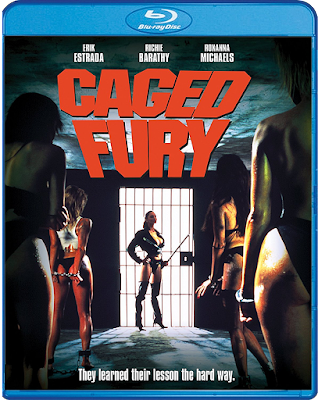 IF YOU LIKE WOMEN IN PRISON, MAD SCIENTISTS, AND HORROR ANTHOLOGIES, SCREAM FACTORY'S GOT YOU COVERED!

Scream Factory has been having a stellar year thus far, and their latest batch of Blu-ray titles continues that streak of excellence! CAGED FURY is a women in prison flick that features a heroic Eric Estrada (who also acted as an Associate Producer on the film), DOCTOR BLOOD'S COFFIN is an obscure tale of a mad scientist trying to bring the dead back to life, and THE HOUSE THAT DRIPPED BLOOD is a classic Amicus Horror anthology! And now all three are available to own in glorious high-definition!

Synopsis: Pray you don't get locked up in Honeywell State Prison! Kathie (Roxanna Michaels) is innocent when they lock her up ... but that won't last long. Women in chains, a deviant warden and murderous guards ... no wonder the cops claim Honeywell State Prison doesn't exist. Her only hope of being freed lies with Harley-riding hero Victor (Erik Estrada) and combat karate champ Dirk (Richie Barathy), who'll take on the whole prison mano a mano if need be. This women-in-prison film also stars Paul L. Smith (MIDNIGHT EXPRESS), Jack Carter (ALLIGATOR), Michael Parks (FROM DUSK TILL DAWN) and adult film stars Janine Lindemulder and Kascha.

Extras:
CAGED FURY is now available on Blu-ray, and costs in the neighborhood of $20 - $24! Get your copy now from AMAZON, BULLMOOSE, DIABOLIK DVD, or directly from SHOUT! FACTORY. 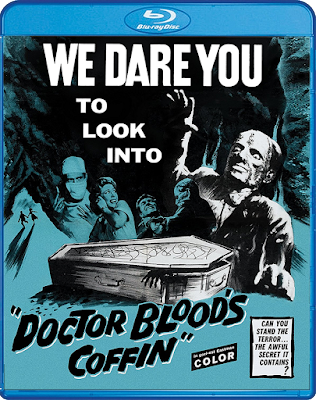 CORRECTION: THIS TITLE AVAILABLE ON MAY 15TH!

Synopsis: After being dismissed from medical school because of his devious experiments, Doctor Peter Blood returns home to join his father's practice. He still believes he can create the perfect human, so he continues his experiments in an abandoned mine where he attempts to revive a rotting corpse.

But Dr. Blood needs a living "donor" to create his "perfect human" and soon people start to disappear from the nearby village. This shocker stars Kieron Moore (THE DAY OF THE TRIFFIDS) and Hazel Court (THE CURSE OF FRANKENSTEIN, MASQUE OF THE RED DEATH) and was directed by Sidney J. Furie (THE ENTITY, THE IPCRESS FILE).

Extras:
DOCTOR BLOOD'S COFFIN is due out on Tuesday, May 15th and falls into the $18 - $23 range. It can easily be procured at AMAZON, BULLMOOSE, or directly from SHOUT! FACTORY. 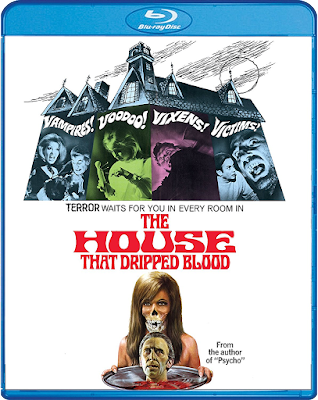 Synopsis: A Scotland Yard inspector's search for a missing film star leads him to a haunted house.  The house sets the framework for four separate tales of terror written by the author of Psycho, Robert Bloch, and starring horror icons Peter Cushing (ASYLUM, TALES FROM THE CRYPT, AND NOW THE SCREAMING STARTS), Christopher Lee (I, MONSTER, SCREAM AND SCREAM AGAIN), and Ingrid Pitt (THE VAMPIRE LOVERS, COUNTESS DRACULA)!

All four stories center on the mysterious fates of tenants who have leased the mansion over the years.

Extras:
Scream Factory's THE HOUSE THAT DRIPPED BLOOD Blu-ray is currently available wherever discs are sold, and should cost between $20 - $24! Order a copy of this oft-overlooked anthology now from AMAZON, BULLMOOSE, DIABOLIK DVD, or directly from SHOUT! FACTORY.