THE RETURN OF SWAMP THING Sprouts Up on Blu-ray on May 15th! 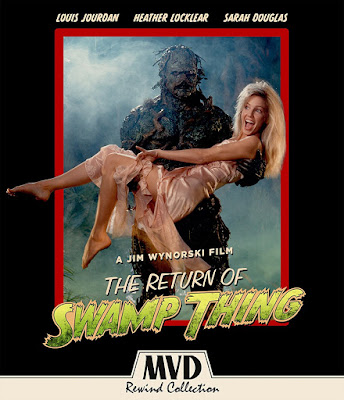 THE FUN AND CAMPY SEQUEL TO WES CRAVEN'S "SWAMP THING" DEBUTS ON BLU-RAY AS PART OF THE MVD REWIND COLLECTION!

THE RETURN OF SWAMP THING is one of my all-time favorite sequels! Heck, I'd even go as far to say that it is one of my favorite films! I have fond memories of renting this on VHS from the long extinct video store that was near my house, and watching it over and over again! And now that THE RETURN OF SWAMP THING has received (what appears to be) a definitive Blu-ray release, I couldn't be happier!

When Abby arrives, Dr. Arcane is hell-bent on taking his own stepdaughter's life in the name of science... that is until she is rescued by SWAMP THING in this must-see sequel to the original cult classic and based on the award-winning DC Comics series!

Extras:
MVD Rewind Collection's THE RETURN OF SWAMP THING Blu-ray/DVD combo pack hits shelves on Tuesday, May 15th and should cost between $25 - $30! It's time to upgrade from that Image Entertainment DVD you own Swamp Thing fans, so make sure to order your new disc now from AMAZON, BULLMOOSE, DIABOLIK DVD, or directly from MVD!