As I type up this post about Umbrella's latest titles, it occurred to me that I somehow totally missed sharing December 2018's new releases! So before we even get into the handful of new Aussie Blus and DVDs that are out this month, let me just quickly list last month's titles.

Now that we're back on track, let's take a gander at Umbrella's January titles! A teenager discovers that his neighbor is a wanted Nazi war criminal in APT PUPIL, which is based upon Stephen King's novella of the same name. In FELICITY, a young girl liberates herself sexually, while in CENTRESPREAD, a naive young girl has to decide between fame or love. In the slapstick sex-comedy PLUGG, a private detective is hired to dig up dirt on an escort agency that the mayor of Perth wants to shut down. Finally, 20 MILLION MILES TO EARTH features Ray Harryhausen's Ymir, a rather tragic Venusian beast that is stranded on Earth! For more info on this titles (and Umbrella's full January roster) please continue onward!

ANNOUNCEMENTS:
* February is a rather sparse month with next to no Horror, Cult, or Exploitation titles. The only release of interest for you Vault Dwellers will probably be WALKABOUT, a tale about two orphaned children struggling to survive in the Australian outback. 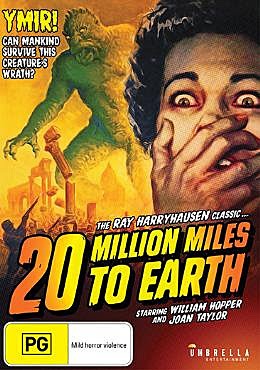 Synopsis: Special effects master Ray Harryhausen (CLASH OF THE TITANS, ONE MILLION YEARS B.C.) brings you one of his earliest groundbreaking films.

On its way home from Venus, a U.S. Army rocket ship crashes into the sea of Sicily leaving Colonel Calder (William Hopper - REBEL WITHOUT A CAUSE) the sole survivor ...or so it seems. A sealed container is also recovered from the wreck and when a zoologist (Frank Puglia - GIRLS! GIRLS! GIRLS!) and his granddaughter (Joan Taylor - EARTH VS. THE FLYING SAUCERS) open it, the gelatinous mass inside escapes.

Overnight, it grows into a horrific monster that has doubled in size. In desperation, Calder calls in the Army to help fight the monster, which has taken refuge atop the Coliseum in Rome. But it will take more than man's weapons to fight the evil forces of the unknown and save the world from destruction.

ORDER "20 MILLION MILES TO EARTH ON BLU-RAY FROM AMAZON.COM OR DIRECTLY FROM UMBRELLA ENTERTAINMENT! 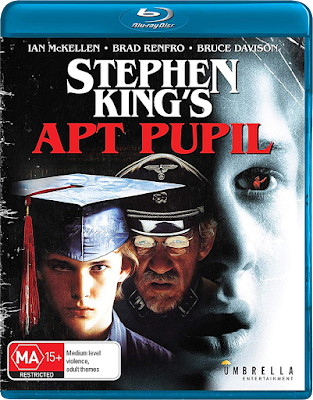 Synopsis: From the novella by acclaimed Horror Master, Stephen King, APT PUPIL is the story of Todd Bowden (Brad Renfro - SLEEPERS), a brilliant young student who discovers that an old man living in his hometown is actually a wanted Nazi war criminal.

To satisfy Todd's curiosity and earn his silence, Kurt Dussander (Ian McKellen - THE X-MEN SERIES) reveals his secret past... but all too soon it becomes clear that Todd is not the one in control of this twisted psychological game and that if he lives through it, he will learn a very dangerous lesson. 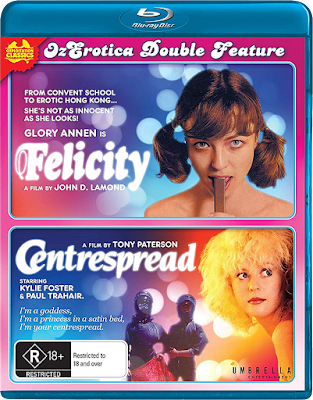 From taboo-breaking pleasures at an all-girl Catholic school to wanton delights in the exotic underground of Hong Kong, come join Felicity as she finally liberates her libido in the Far East with the help of Penthouse pet and Bond girl Joni Flynn (OCTOPUSSY).

CENTRESPREAD Synopsis: In a world at the brink of the 21st century, where strict social stratification is rigidly enforced, where spending power is related to social utility rather than to productivity, and the only manifestation of violence is in magazine pages, a photographer whose special talent is mixing violence and sex, is told to find a new girl whose freshness will rejuvenate the pages of the magazine.

Gerard (Paul Trahair) not only fulfils his task but also rediscovers innocence and a world left behind by advancing technology when he uncovers Niki (Kylie Foster - QUIGLEY DOWN UNDER). But love is not in the Editor's plans and he offers Niki a choice - stardom or the love of a redundant photographer.... 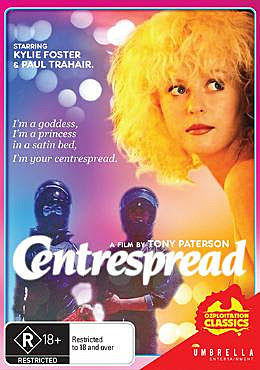 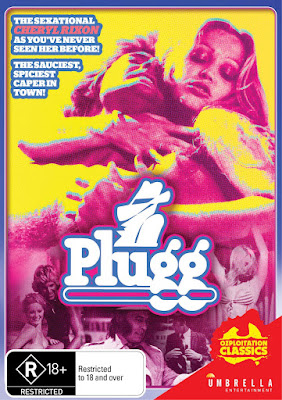 Synopsis: PLUGG is a slapstick comedy in which a blonde from the Pussycat Escort Agency is stalked and ogled by a comic private detective named Plugg (Peter Thompson - MAD DOG MORGAN).

Private detective, Horatio Plugg, has been commissioned by Mayor Claude Marshall-Enright (Edgar Metcalfe - A CRY IN THE DARK) to get a complete dossier on the Perth-based agency so it can be shut down. The owner of the agency (Alan Cassell, BREAKER MORANT) wants to keep practicing his golf so gets Plugg on the case...

ORDER "PLUGG" ON DVD NOW FROM AMAZON.COM OR DIRECTLY FROM UMBRELLA ENTERTAINMENT.

Posted by The Vault Master at 7:27 PM