On January 29th Scream Factory Brings You Wings and Things! 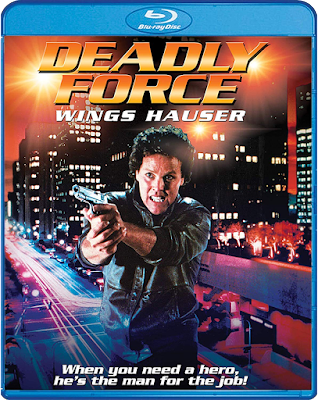 I have yet to watch DEADLY FORCE, but it seems to fit thematically with Scream Factory's latest Collector's Edition releases of 10 TO MIDNIGHT and COBRA. I haven't seen SCREAMERS since it premiered on cable (on Cinemax if memory serves) well over a decade ago, but I have been meaning to revisit it. Sigh.... guess it's time to pick up that second job I've been thinking about so I can buy these.

Synopsis: The X-killer is too insane to be caught. But one ex-cop is just crazy enough to try. Los Angeles is in the clutches of terror as a killer stalks the streets. Seventeen people have died and the only clue is an "X" carved in the forehead of each victim. Enter Stoney Cooper (Wings Hauser), a former police-officer-turned-private-detective. He's super-tough, rebellious, and angry and vows to bring the psychopath responsible for the "X-murders" to justice.

When innocent people are at risk ... when the police are powerless ... when nothing else will do ... your only recourse is DEADLY FORCE.

Extras:
DEADLY FORCE debuts on Blu-ray on Tuesday, January 29th and should cost between $19 - $23! Order yourself a copy now from AMAZON, BULL MOOSE, DIABOLIK DVD, or directly from SHOUT! FACTORY. 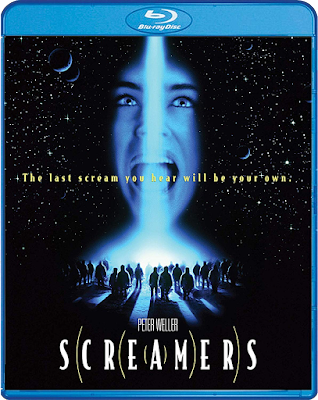 Synopsis: The year is 2078. The man is rebel Alliance Commander Col. Joseph Hendrickson (Peter Weller), assigned to protect the Sirius 6B outpost from ravage and plunder at the hands of the New Economic Bloc.

His state-of-the-art weaponry are known as Screamers: manmade killing devices programmed to eliminate all enemy life forms. Screamers travel underground, their intent to kill announced by piercing shrieks. They dissect their victims with sushi precision, then eradicate all traces of the carnage. They are lethal. Effective. Tidy.

Extras:
SCREAMERS (not SCREAMERS) also arrives on Blu-ray on January 29th and should cost between $22 - $24! Guarantee yourself a copy now by ordering from AMAZON, BULL MOOSE, DIABOLIK DVD, or directly from SHOUT! FACTORY's online store!

Posted by The Vault Master at 2:21 AM