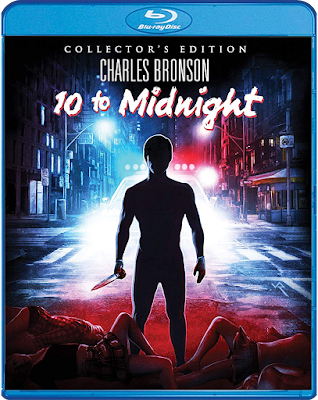 As much as it pains me to say it Vault Dwellers, I have never seen 10 TO MIDNIGHT. This is a real tragedy because I love Charles Bronson and I love slasher flicks! I vow to remedy this injustice as soon as possible. (This weekend maybe?) COBRA on the other hand I am quite familiar with - looks like it's time to upgrade from my old DVD (which is nestled in one of those awful cardboard snap-cases that never really caught on).

While I'm already convinced that I need both of these Blu-ray discs, maybe those of you reading this post are on the fence? Well if that's the case, let's take a closer look at both releases!

Synopsis: Charles Bronson is "a hero all the way" (Variety) as a rogue cop pursuing a deranged killer in this action-packed suspense/thriller. Serving up vigilante justice as only he can, Bronson delivers one of his most riveting performances in this exceedingly well-made film.

Bronson plays Leo Kessler, a cynical Los Angeles cop on the trail of Warren Stacy (Gene Davis), a homicidal maniac who turns rejection from beautiful women into the ultimate revenge. When the legal system sets Stacy free, Kessler plants evidence to put him behind bars for good. But Kessler's plan backfires, leaving him with only one option: to hunt down Stacy on his own ... before the crazed killer can strike again!


Extras:
10 TO MIDNIGHT's new Collector's Edition is currently available wherever Blu-ray discs are sold, and goes for between $28 - $30. You can order it now from AMAZON, BULL MOOSE, DIABOLIK DVD, or directly from SHOUT! FACTORY, which will net you an 18" x 24" rolled poster featuring this release's new cover art! (While supplies last of course.) 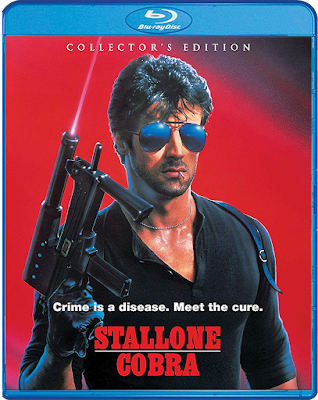 The trail leads to not one murderer but also an army of psychos bent on slashing their way to a "New Order" – and killing a witness (Brigitte Nielsen) along the way. Fortunately, her protector is Cobra, a man who delivers vigilante justice like no other!