SPLATTER UNIVERSITY, THERE'S NOTHING OUT THERE, and UNINVITED Arrive on Blu-ray January 29th! 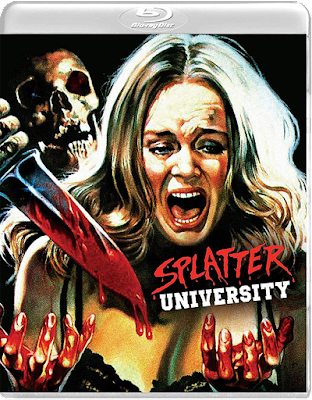 I first experienced UNINVITED on late night cable TV on USA UP... All Night hosted by Gilbert Gottfried. And as silly as it is, this movie scared the bejesus out of me as a kid! Directed by Greydon Clark (WITHOUT WARNING, WACKO) this film follows a group of people on a yacht being terrorized by a mutant creature that hides within a cat until threatened!

THERE'S NOTHING OUT THERE I discovered nearly twenty years ago thanks to Andrew from  Badmovies.Org, who gave it a glowing review. Everyone gives Wes Craven's SCREAM credit for being the first meta-Horror film, but THERE'S NOTHING OUT THERE preceded it by a full five years, and features a horror movie-obsessed character who tries to defend himself (and his friends) from an otherworldly terror!

SPLATTER UNIVERSITY is one of the few slasher films I've missed out on over the years, so I'm pretty curious about it. Directed by Richard Haines (CLASS OF NUKE 'EM HIGH, ALIEN SPACE AVENGER), this low-budget 16mm shocker seems like it'd go well with SLAUGHTER HIGH, GRADUATION DAY, and FINAL EXAM!

If I've piqued your interest in any of these new VinSyn releases, scroll down to see the specs & extras for these discs!

Synopsis: Years ago, a madman escaped from an asylum, slashing his way through to freedom and continuing his bloody rampage at nearby Saint Trinian’s College. Now, years later, new teacher Julie Parker, begins to sense that something isn’t quite right at the small town college and it’s not long before her students and fellow faculty members begin disappearing or, worse yet, are found brutally butchered. Determined to uncover the truth behind the ongoing violence, Julie begins her own investigation, unaware that she’s putting herself at risk of becoming the ruthless murderer’s next target.

A classic of no-budget horror filmmaking, Richard W. Haines’ SPLATTER UNIVERSITY is a trashy and consciously absurd 80s slasher that revels in the best (and worst) tropes of the genre. Sporting bloody kills, absurd twists, and a face smacking finale, Vinegar Syndrome presents SPLATTER UNIVERSITY in its North American Blu-ray debut, sporting a brand new (and first ever) restoration from its original 16mm camera negative!

Extras:
Richard Haines' SPLATTER UNIVERSITY hits retailers on Tuesday, January 29th and cost between $20 - $25! Get it now from AMAZON, BULL MOOSE, DIABOLIK DVD, or directly from VINEGAR SYNDROME if you want an extremely limited (to 1,500) embossed slipcover! 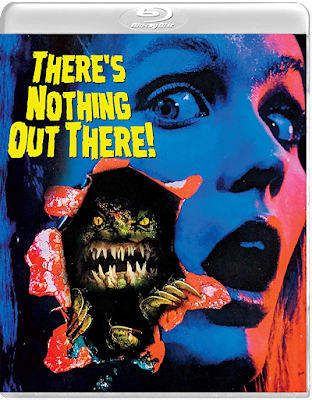 Synopsis: Mike is always getting in the way of fun. His obsession with horror movies and their rules dictates that no matter where he goes, he can’t help but expect to find a monster lurking around every corner. But this time, his paranoia might be justified…

After being invited to a remote lodge, along with some friends, Mike immediately begins to sense that something isn’t right, but none of his friends believe him. Unfortunately, they’re dead wrong, and a slimy alien frog monster has indeed landed in the nearby woods and set out to fulfill it’s mission of killing all human males and mating with females. Can Mike convince his friends that there IS something out there, before the men have their brains sucked out and the women are carrying green mutant fetuses?

Made by then 19 year old cinematic wunderkind Rolfe Kanefsky, THERE’S NOTHING OUT THERE is a gag and gore filled horror comedy which lovingly riffs on some of the genre’s most used tropes. Produced and edited by acclaimed editor Victor Kanefsky (GANJA & HESS, BLOODSUCKING FREAKS), Vinegar Syndrome presents the Blu-ray debut of THERE’S NOTHING OUT THERE, newly restored from its 35mm interpositive and featuring more extra features than any other title in our catalog!

Extras:
Holy HELL! Not only does this oft-forgotten Horror gem get a new 2K transfer, but.... FOUR audio commentaries?! That's insane! THERE'S NOTHING OUT THERE will also be released on January 29th and should cost between $20 - $25! Order it now from AMAZON, BULL MOOSE, DIABOLIK DVD, or directly from VINEGAR SYNDROME, which will net you a Limited Edition embossed slipcover (limited to 2,000)! 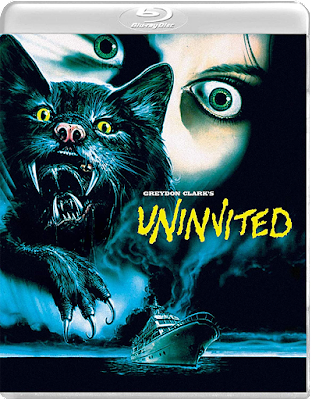 Synopsis: At a secluded biochemical lab, which runs cruel tests on animals, a seemingly innocent looking cat has just escaped. But beneath its furry exterior, a terrifying monster has been seeded, emerging to brutally maim and kill anyone it finds threatening.

Discovered by a group of teenage spring breakers and brought aboard a luxury yacht bound for the Cayman Islands, the cuddly fluff ball quickly begins gnawing away at the ship’s guests and crew. But to make matters even worse, it’s soon revealed that the cruise’s host, a renowned multimillionaire, is in fact on the run from the law and won’t return the boat to shore, killer mutant cat be damned!

Extras:
Vinegar Syndrome has given this movie far more attention than it deserves, and I love them for it! UNINVITED arrives at most retailers on January 29th, and should cost between $20 - $25! Order it now from AMAZON, BULL MOOSE, DIABOLIK DVD, or directly from VINEGAR SYNDROME to obtain one of their cool limited (to 2,000) edition embossed slipcovers!