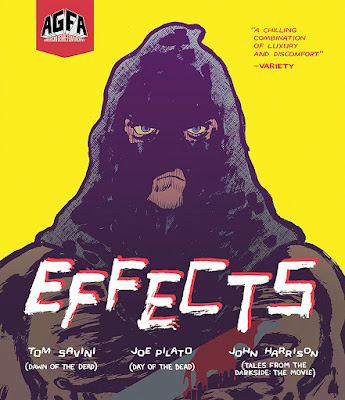 THE AGFA CONTINUES ITS MISSION TO RESCUE & PRESERVE
FILMS WITH THEIR 4K RESTORATION OF DUSTY NELSON'S
"EFFECTS!"

I've heard of this film, but like so many others,  I haven't had a chance to watch it yet. EFFECTS was shot on a shoestring budget, and features Tom Savini, Joe Pilato (Captain Rhodes in DAY OF THE DEAD), and John Harrison (TALES FROM THE DARKSIDE: THE MOVIE)!

Rescued from oblivion, the AGFA has made an all new transfer from the last known print of the film! EFFECTS has been meticulously cleaned up, frame by frame, and lovingly restored in 4K in order to give us the best possible presentation of this forgotten classic!

Synopsis: Cobbled together with loose change by George Romero's friends, EFFECTS is a mesmerizing D.I.Y. frightmare that no one talks about, but everyone should! A group of coked-up filmmakers -- including Tom Savini, Joe Pilato, and John Harrison -- gather in Pittsburgh to make a slasher flick.

As filming begins and accidents happen, it's clear that something isn't right, and no one can be trusted. Landing somewhere between SNUFF and a student film by John Carpenter, EFFECTS is a meta-enhanced takedown on the philosophy of horror that doubles as a sleazy and terrifying movie on its own.

Extras:
This is the AGFA's second Blu-ray release this year (coming just behind THE ZODIAC KILLER) and is part of their long term goal of creating archival 4K scans of hundreds of rare and forgotten films! EFFECTS is a piece of cinematic (Horror) history that deserves a spot in your collection, so be sure to order a copy today from AMAZON, BULLMOOSE, or DIABOLIK DVD!