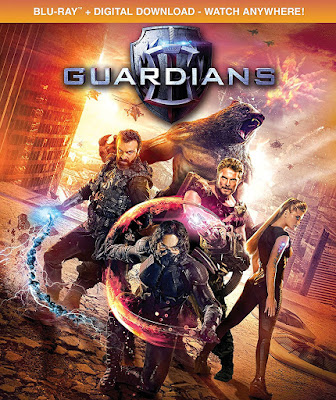 
Ever since I first laid eyes on the trailer for GUARDIANS, I knew I had to see what appears to be Russia's version of the Fantastic Four. The main selling point for me? A werebear! There is a character in this film can turn into a mini-gun toting bear-man! As soon as I saw that, I was sold!

Synopsis: Defenders of the world, unite! Brace yourselves for non-stop action and edge-of-your-seat thrills with a massive werebear, a man who can move mountains, a martial artist, and a blademaster! Alone, they are freaks. Together, they’re the Guardians!

During the Cold War, the secret organization “Patriot” created an elite squad of superheroes to defend the Soviet republic from threats far beyond the capabilities of mortal men. For years, these heroes hid in the shadows… but now, four must emerge to defend their homeland from a menace unlike any other they have faced before: The diabolical, power-hungry scientist Kuratov.

Extras:
Once again, GUARDIANS will be a Wal-Mart exclusive and arrive in stores on September 5th, and will then become available everywhere else on December 5th!  You can pre-order the Blu-ray or DVD from AMAZON, or have it in your hands after Labor Day weekend by visiting the electronics department of your local Wal-Mart.