Scream Factory gives you a double dose of hairy palms with TEEN WOLF and TEEN WOLF TOO! 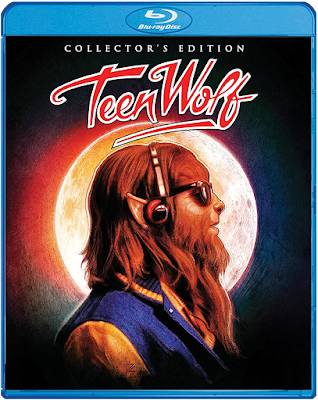 TEEN WOLF has been one of my fave 80s flicks since forever! It has a memorable cast of characters, fairly decent makeup f/x, good tunes (Win In The End for the win!), and has a warm gooey message of "being true to oneself." The sequel.... not so much...

And though I would have preferred both films paired up in a single double-feature release, the new transfers and extras more than make up for it! If you're a fan of both films (i.e. TEEN WOLF, because honestly, who is even remotely excited for the sequel? Besides me?) then scroll on down to see the fulls specs and extras so that you can rationalize adding them to your collection!

TEEN WOLF Synopsis: "He Always Wanted To Be Special … But He Never Expected This!" Like all teenagers, Scott Howard (Michael J. Fox, the BACK TO THE FUTURE trilogy) is going through some … changes. But unlike the rest of the students at Beacontown High School, Scott's changes include long hair that covers his entire body, claw-like fingernails, fangs, a heightened sense of smell, superhuman strength and the extraordinary ability to … play basketball? And that's just the beginning.

Naturally, these uncanny new features turn this lovable loser into the most popular kid in school. But by embracing his newly minted popularity, has the "Teen Wolf" lost sight of what it truly means to be Scott Howard?

Extras:
Whoa! A new HD transfer plus a nearly two-and-a-half documentary?! That's totally worth the price of admission! You can order TEEN WOLF: COLLECTOR'S EDITION now from AMAZON, BULLMOOSE, DIABOLIK DVD, or SHOUT! FACTORY! If you order from Shout! your disc will also come with a rolled 18x24 poster featuring the new key cover art! (While supplies last.) 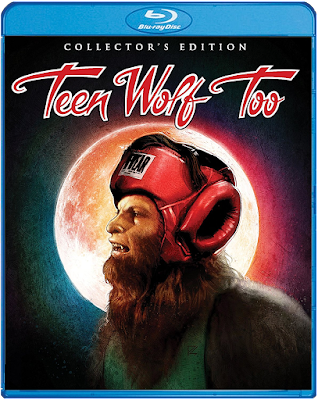 TEEN WOLF TOO Synopsis: "High School Was Easy, But College Is A Whole Different Animal!" Jason Bateman (HORRIBLE BOSSES) stars as Todd Howard, a Hamilton University freshman with a full athletic scholarship — only Todd has no idea why, since he's far more interested in veterinary medicine than sports. But his boxing coach, Bobby Finstock, is very familiar with the Howard family secret and he's hoping he can use it to his advantage.

When the whole school — including Todd — finds out that he's a werewolf with superhuman abilities, Todd's popularity skyrockets and he becomes the big wolf on campus. But is his fame a gift? Or a curse?

And can he keep it from getting in the way of the relationships he has with his best friends and girlfriend? Perhaps a little guidance from his professor (Kim Darby, TRUE GRIT), who has a secret of her own, may help Todd learn the biggest lesson of all.

Extras:
TEEN WOLF TOO: COLLECTOR'S EDITION also premieres on Tuesday, August 8th and will be available at AMAZON, BULLMOOSE, DIABOLIK DVD, and SHOUT! FACTORY. As is the case with TEEN WOLF, if you order the sequel directly from Shout!, you will get a poster with it! (Again, while supplies last.)