ALIEN: COVENANT will hug your face on August 15th! 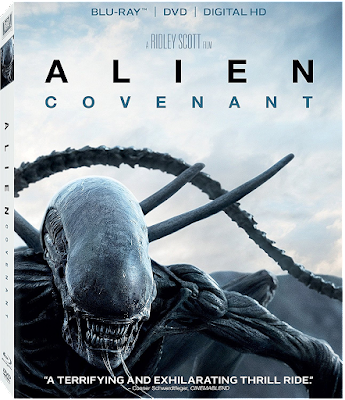 I was not a huge fan of PROMETHEUS, but I did enjoy its followup quite a bit. ALIEN: COVENANT is a solid entry into the franchise, and Michael Fassbender steals the show both as David, and a new synthetic human called Walter.

Also, if you plan on picking this up, but for some reason don't have all the other movies, there is a groovy new set featuring all six films be released Tuesday as well! You can order it HERE.

Synopsis: The crew of the colony ship Covenant, bound for a remote planet on the far side of the galaxy, discovers what they think is an unchartered paradise, but is actually a dark, dangerous world. When they uncover a terrifying threat beyond their imagination, they must attempt a harrowing escape.

Featuring an all-star cast including Academy Award Nominee Michael Fassbender (The X-MEN franchise, STEVE JOBS), Katherine Waterston (FANTASTIC BEASTS AND WHERE TO FIND THEM), Billy Crudup (JACKIE), Danny McBride (THIS IS THE END) and Demián Bichir (THE HATEFUL EIGHT), ALIEN: COVENANT is loaded with bonus material!

Extras:
Fans can also pick up exclusive editions of this title at Walmart, Target and Best Buy! ALIEN: COVENANT is available everywhere on Tuesday, August 15th on 4K UHD and on a Blu-ray/DVD/Digital HD combo pack! The film is guaranteed to have the best audio & video available, and has plenty of extras, so fans of the ALIEN series will definitely want to add it to their collection! Order it now from AMAZON or BULLMOOSE!