A Dan O'Bannon Classic is being RESURRECTED by Scream Factory on September 12th! 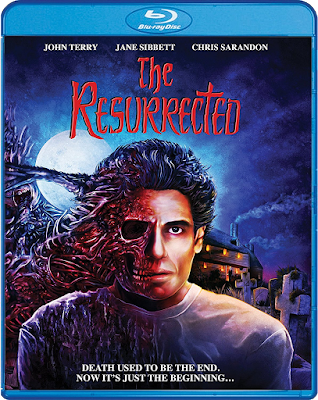 FROM THE DIRECTOR OF "RETURN OF THE LIVING DEAD," COMES A LOVECRAFTIAN HORROR TALE THAT HAS BEEN LONG OUT OF PRINT!

As a casual H.P. Lovecraft fan, I have to admit that I am excited for this release. This is mostly because I have never seen Dan O'Bannon's THE RESURRECTED (aka SHATTERBRAIN), which is based upon Lovecraft's "The Case of Charles Dexter Ward." I'm really looking forward to this Scream Factory title and can't wait to own it on September 12th!

Synopsis: Death used to be the end. Now it’s just the beginning… Since the beginning of time, man has struggled with death. Now Charles Dexter Ward (Chris Sarandon - FRIGHT NIGHT), a wealthy scientist, may have found a way to beat it. Using an ancient diary and human remains, Ward begins a terrifying and bloody pursuit for immortality. By the time his wife Claire (Jane Sibbett - ARRIVAL II) hires private investigator John March (John Terry - ZODIAC, FULL METAL JACKET) to halt the horrible experiments, it's too late … the dead have already been resurrected!

Extras:
Wow! A 2K remaster and tons of extras?! Sign me up! Once again, Scream Factory's Blu-ray of THE RESURRECTED will be available on Tuesday, September 12th. You can order it now from AMAZON, BULLMOOSE, DIABOLIK DVD, or directly from SHOUT! FACTORY. As is usually the case, if you order from Shout!, you'll receive your movie two weeks early!