James Gunn's GUARDIANS OF THE GALAXY VOL. 2 now available on all formats! 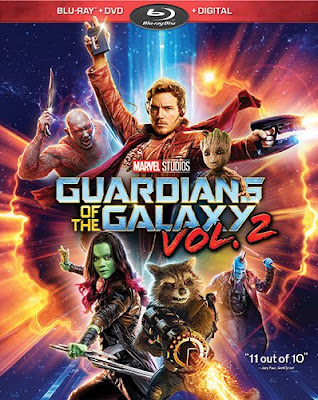 JAMES GUNN'S HIT SEQUEL PROVIDES AN AWESOME MIX OF ACTION, HUMOR, AND MUSIC! GET IT TODAY ON DVD, BLU-RAY, OR 4K UHD!

GUARDIANS OF THE GALAXY VOL. 2 was (thus far) my favorite film of 2017! It's funny, has some great action sequences and effects, and so many surprisingly heartfelt moments. It's a big step up from the previous installment, and I for one cannot wait to see Marvel's Cosmic Cinematic Universe expand to include more characters! (Also, more James Gunn films please!)

I should also note that this release is the first title that Disney has released on 4K! So it looks like James Gunn's got even more bragging rights now!

Synopsis: Set to the all-new sonic backdrop of Awesome Mixtape #2, the film's storyline continues the team's adventures as they traverse the outer reaches of the cosmos. The Guardians (Chris Pratt as Peter Quill/Star-Lord, Zoe Saldana as Gamora, Dave Bautista as Drax, Vin Diesel as the voice of Groot, and Bradley Cooper as Rocket) must fight to keep their newfound family together as they unravel the mystery of Peter Quill's true parentage. Old foes become new allies and fan-favorite characters from the classic comics will come to our heroes' aid as the Marvel Cinematic Universe continues to expand!