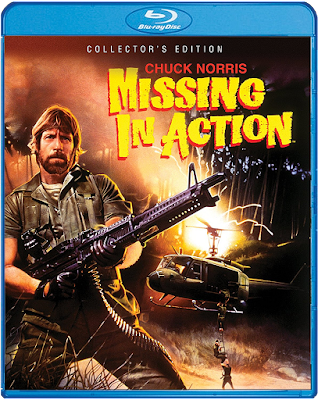 ON AUGUST 15TH, JOE ZITO'S "MISSING IN ACTION" FINALLY GETS A RELEASE WITH SPECIAL FEATURES, COURTESY OF SHOUT! FACTORY!

MISSING IN ACTION has been released countless times on DVD and Blu-ray, and all we've ever gotten as an extra was the trailer. Now with Shout! Factory's Collector's Edition of the film, we get a few new special features created just for this release, but it doesn't appear that the original theatrical trailer made the cut!

Synopsis: "The war isn't over until James Braddock brings back our POWs!" American servicemen are still being held captive in Vietnam – and it's up to one man to bring them home in this blistering, fast-paced action/adventure starring martial arts superstar Chuck Norris. Following a daring escape from a Vietnamese POW camp, Special Colonel James Braddock (Norris) is on a mission to locate and save MIA soldiers.

Aided by a beautiful State Department official (Lenore Kasdorf) and a former Army buddy (M. Emmet Walsh), Braddock amasses top secret information and state-of-the-art weaponry. Now this one-man army is prepared to blast his way into Vietnam ... but will he be able to blast his way back out?

Extras:
Yeah, that's pretty light for a Collector's Edition release (seriously though, no trailer?!) BUT that new Zito audio commentary is probably more than worth the price of admission. And the fact that this release is going for fifteen dollars (or less) at the moment, makes this enticing enough to warrant the purchase. Once again, MISSING IN ACTION: COLLECTOR'S EDITION comes out on Tuesday, August 15th and can be ordered now from AMAZON, BULLMOOSE, DIABOLIK DVD, or directly from SHOUT! FACTORY!