Shout! Factory flexes its Blu-ray might with a double dose of HERCULES! 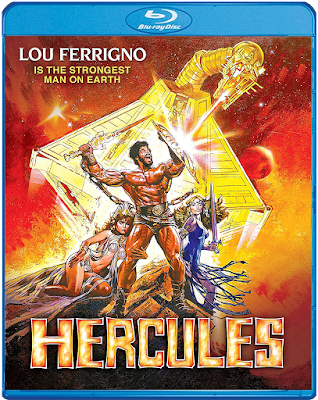 ENJOY THE HERCULEAN ADVENTURES OF LOU FERRIGNO WITH THIS PAIR OF SHOUT! FACTORY RELEASES!

I've seen my fair share of classic Hercules adventures and Peplum films, but somehow I have never had a chance to watch the completely insane 80s Herc films featuring the original Incredible Hulk himself, Lou Ferrigno! Now, thanks to Shout! Factory, I can enjoy both of these Cannon Films classics in high-definition, with new and vintage special features!

Synopsis for HERCULES: "The strongest man on Earth … in a super-adventure odyssey." The incredible Lou Ferrigno steps into the sandals of the most durable demigod in myth and motion pictures: Hercules! With the strength of an army, our hero battles the forces of darkness in one unbelievable exploit after another.

From bloodthirsty bears and loathsome reptiles to giant robots and laser beams, he stands tall against all who oppose him in his battle against the nefarious Minos (William Berger). But even the mighty Hercules himself may not be impervious to the bewitching charms of Sybil Danning in the role of the seductive and sultry Adriana. (And can you blame him?)

From Luigi Cozzi (credited as Lewis Coates), the director/co-writer of the cult favorite STARCRASH, HERCULES is a fantastic flight of the imagination and a ridiculously entertaining, 80s-induced take on the legendary mythology 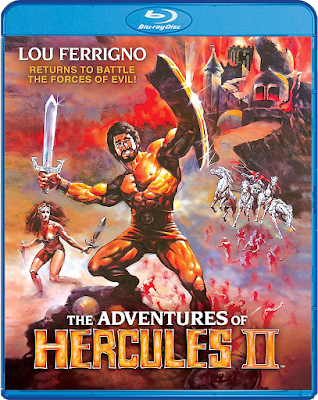 Synopsis for THE ADVENTURES OF HERCULES II: "From a mythic world beyond your imagination ... Hercules returns!" When three traitorous goddesses steal seven magical thunderbolts with unearthly power, it falls to one man with the strength of one hundred to save the universe from eternal chaos and darkness: Hercules (the incredible Lou Ferrigno)!

As an Olympian array of monstrous villains line up to claim Hercules' head, our protagonist must summon every last ounce of his formidable strength to defeat them all, recover the thunderbolts, and take to the cosmos itself for one final battle with his archnemesis, King Minos.

THE ADVENTURES OF HERCULES II features the man, the myth, the legend himself in his most titanic labor yet!

You can pick up THE ADVENTURES OF HERCULES II now from AMAZON, BULLMOOSE, DIABOLIK DVD, or SHOUT! FACTORY.