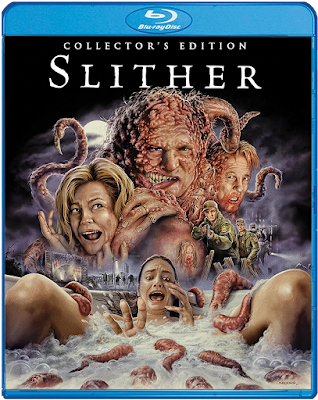 I adored SLITHER when it hit theaters back in 2006, and was saddened to see it flop. (That's what happens when the studio has no idea how to promote your film. See also NIGHTBREED.)

So you can imagine the sheer joy I experienced when I found out that Gunn's film had garnered enough of a cult following to become part of Scream Factory's lineup! Now SLITHER finally has received the love it to richly deserves!

Synopsis: From the co-writer and director of GUARDIANS OF THE GALAXY 1 & 2 and SUPER, comes the deliciously demented story of an unnamed evil wreaking havoc on a small town. Intent on devouring all life on Earth, this dark and slimy entity is infecting anyone in its path. Now it's up to the local sheriff, Bill Pardy (Nathan Fillion, Firefly, SERENITY), and his team to stop the spread of rampant devastation – and shocking mutilation – before it's too late!

Extras:
Scream Factory's new Collector's Edition of SLITHER is definitely a must-own in my book, and is probably the most comprehensive release of this film we'll ever get. You can buy it right now from AMAZON, BULLMOOSE, DIABOLIK DVD, or directly from SHOUT! FACTORY.