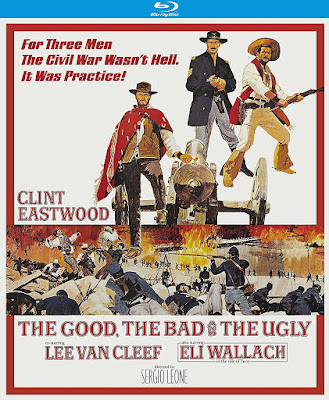 In all honesty, while I do enjoy this entry into the "Man With No Name Trilogy," its not my absolute favorite. That being said, I'm really excited for Kino Lorber's brand new 2-disc Blu-ray of this classic title, which two cuts of the film (both restored in 4K!) and hours of extras features! Read onward fellow spaghetti western fans, so that you can rationalize buying this film yet again!

Synopsis: "For three men the Civil War wasn't hell... it was practice!" By far the most ambitious, unflinchingly graphic and stylistically influential western ever made, THE GOOD, THE BAD, & THE UGLY is a classic actioner shot through with a volatile mix of myth and realism. Screen legend Clint Eastwood (A FISTFUL OF DOLLARS, FOR A FEW DOLLARS MORE) returns as "The Man with No Name," this time teaming with two gunslingers to pursue a cache of $200,000 and letting no one, not even warring factions in a civil war, stand in their way.

From sun-drenched panoramas to bold hard close-ups, exceptional camerawork captures the beauty and cruelty of the barren landscape and the hardened characters who stride unwaveringly through it.  Hailed as "pure cinema" by Robert Rodriguez and "the best directed movie of all time" by Quentin Tarantino, this epic masterpiece was directed by the great Sergio Leone (ONCE UPON A TIME IN THE WEST) and co-starred Lee Van Cleef (DEATH RIDES A HORSE, SABATA) as Angel Eyes, and Eli Wallach (THE MAGNIFICENT SEVEN) in the role of Tuco.

DISC TWO
Kino Lorber's 2-Disc Blu-ray of THE GOOD, THE BAD, & THE UGLY seems like a worthwhile upgrade (though it apparently isn't the definitive release, according to this review), and you can order it now from AMAZON, BULLMOOSE, and DIABOLIK DVD!