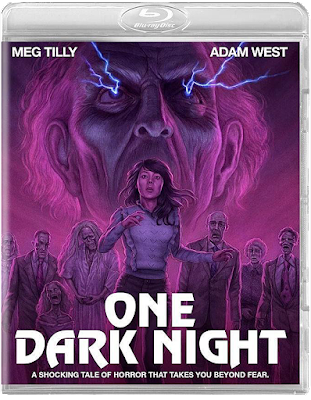 While I am familiar with Tom McLoughlin, I must admit that anything past FRIDAY THE 13TH PART VI and his band The Sloths is unknown territory for yours truly. So I'm very curious about Tom's ONE DARK NIGHT, especially since Code Red put so much effort into this release! Along with a new transfer and reversible cover art, they packed this Special Edition with tons of extras!

Synopsis: A world famous psychic is found dead along with several victims of his bizarre experiments. One the same day his body is interred in a mausoleum, high-schooler Julie Wells (Meg Tilly, PYSCHO II, THE BIG CHILL, BODY SNATCHERS) agrees to spend the night there all alone  as part of a hazing to join the clique, "The Sisters" (Robin Evans, E.G. Daily, Leslie Speights). Later that night, the sisters secretly return to torment Julie in an attempt to scare her out of her mind. But the girls are not alone.

The psychic s experiments continue even after death - on his own body and on the dozen resident corpses in various stages of decay. Soon they're exhumed and looking for fresh bodies! ONE DARK NIGHT haunts audiences' psyches with its claustrophobic setting, moody cinematography, foreboding score and ultra-realistic makeup effects. Tom McLoughlin (DATE WITH AN ANGEL, FRIDAY THE 13TH PART VI: JASON LIVES) directed this terrifying chiller which co-stars the great Adam West (Batman, Family Guy).

Extras:
Undead psyhics, zombies, and Adam West?! Sign me up! ONE DARK NIGHT is currently available for purchase at BULLMOOSE and DIABOLIK DVD. It will also be available on AMAZON this coming Tuesday (August 15th)!