COLOR ME BLOOD RED Comes to Blu-ray on February 19th! 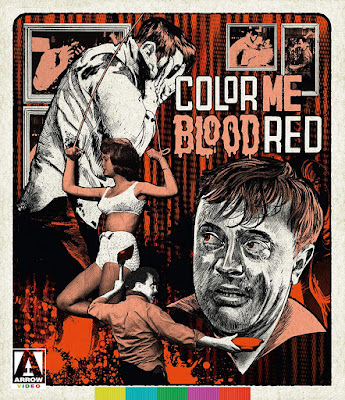 After releasing the incredible HERSCHELL GORDON LEWIS FEAST boxed set back in October of 2016, Arrow has slowly been putting each of H.G. Lewis' gore-flicks out separately. And this week, COLOR ME BLOOD RED gets its due with this really solid Blu-ray release from Arrow Video!

Synopsis: For the third and final installment in his infamous 'Blood Trilogy', COLOR ME BLOOD RED, splatter movie pioneer Herschell Gordon Lewis turned to the world of fine art for this tortured tale of a troubled artist turned homicidal maniac. Painter Adam Sorge has found himself in a bit of a creative lull. But when his girlfriend accidentally cuts her finger, he realizes what his work has been missing all this time - human blood!

With pressure mounting from local gallery owner Farnsworth to deliver his next masterpiece, Adam sets about procuring as much glorious hemoglobin as he can muster - first from himself, and then from anyone unfortunate enough to pass by his sickening studio of slaughter. The final filmic collaboration between H.G. Lewis and producer/master exploiteer David F. Friedman (who collectively delivered the equally demented BLOOD FEAST and TWO THOUSAND MANIACS!) COLOR ME BLOOD RED is a crazed creation that truly puts the pain in painting!

Extras:
COLOR ME BLOOD RED comes to Blu-ray on Tuesday, February 19th and should cost between $22 - $24. Add this H.G. Lewis classic to your collection this week - pick up a copy from AMAZON, BULL MOOSE, or DIABOLIK DVD!