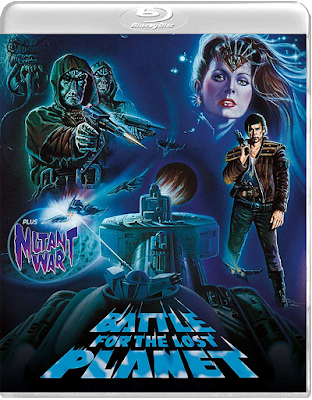 I gotta say Vault Dwellers, Vinegar Syndrome has really upped their game in the past few years! More and more of their titles have found a home in my personal collection, and I doubt that trend is going to stop because their latest batch of new releases is pretty freakin' awesome! Let's take a closer look at the four new Blu-ray/DVD combo packs that VinSyn has just put out!

Synopses: In BATTLE FOR THE LOST PLANET rogue master thief Harry Trent (Matt Mitler) who, in an attempt to steal military secrets, found himself stranded alone in space for years, finally returns to earth only to discover that the planet has been taken over by vicious gangs of alien mutants. Finding himself forced into a fight for his life, Harry is soon discovered and taken in by a beautiful warrior (Denise Coward) and her resistance group who hope to outwit the extra terrestrial invaders and reclaim the planet. 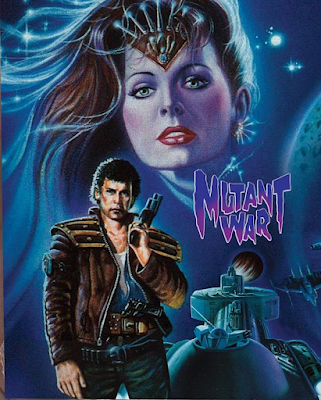 MUTANT WAR continues the story, finding Harry still at odds with conquering aliens, but this time having to contend with an even deadlier enemy: another human. After meeting a young girl who begs him to help save her family, Harry learns of power hungry deviate Reinhart Rex, a futuristic white slaver that kidnaps young women for breeding purposes. Can Harry outwit Reinhart while still escaping the clutches of flesh eating mutants?

Extras:
Vinegar Syndrome's BATTLE FOR THE LOST PLANET & MUTANT WAR double feature is now available wherever Blu-ray discs are sold and goes for between $20 - $25. Order yourself a copy of this once super rare pair now from AMAZON, BULL MOOSE, DIABOLIK DVD, or directly from VINEGAR SYNDROME! 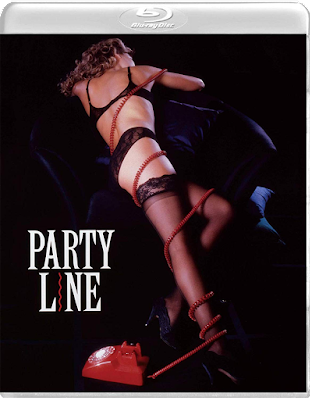 Synopsis: Brother and sister Seth and Stacy live a secluded life in their family's beautiful Beverly Hills mansion. But these upper class siblings share a dark and violent hobby of using sexually driven 'party lines' to meet and lure lustful strangers into a deadly ménage à trois, the climax of which is a razor slash to the throat! With the victim count steadily rising, Detective Dan is under the gun to crack the case, but when his girlfriend falls prey to the maniacal duo, Dan goes rogue, taking his own violent measures to dispense justice.

Extras:
PARTY LINE has made its Blu-ray debut today and should cost between $20 - $25! Get yourself a copy now from AMAZON, BULL MOOSE, DIABOLIK DVD, or directly from VINEGAR SYNDROME! 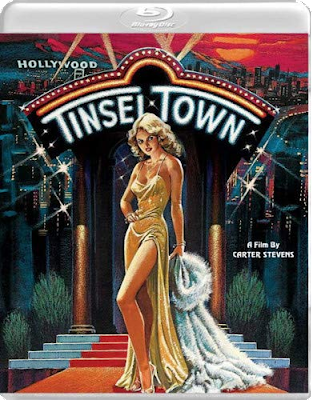 Extras:
TINSELTOWN is now available on a Blu-ray/DVD Combo pack that costs between $23 - $25! Order one now from AMAZON, DIABOLIK DVD, or directly from VINEGAR SYNDROME! 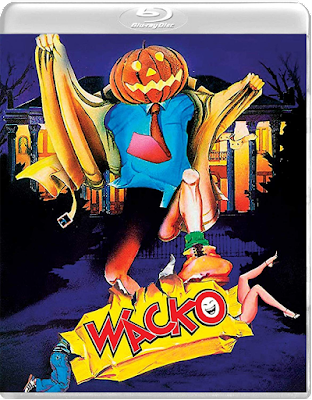 Synopsis: Thirteen years ago, at the Halloween Pumpkin Prom, the infamous Lawnmower Killer went on a brutal rampage, murdering several high school students, including Mary Graves' older sister, traumatizing her for life. Now, after the unexpected escape of a prisoner from the state mental hospital, who may or may not be the killer, it's up to hard-nosed gumshoe Dick Harbinger to solve the case before the Lawnmower Killer seeks out a new slew of victims at the upcoming Pumpkin Prom, that is if anyone is able to survive the hilarious horror hijinks leading up to it!

Extras:
WACKO's Blu-ray/DVD combo pack is currently available wherever discs are sold, and should cost between $20 - $25! Order a copy of this oddball Horror parody now from AMAZON, BULL MOOSE, DIABOLIK DVD, or directly from VINEGAR SYNDROME!


ADDITIONAL INFO: If you order these films directly from Vinegar Syndrome, each one (except for TINSELTOWN) comes with a limited edition slipcover! Also, if you plan on buying all four, you can save some money by getting VinSyn's FEBRUARY 2019 PACKAGE, which will cost you a reasonable $88.00 (and include the aforementioned slipcovers)!

Posted by The Vault Master at 3:35 AM