Scream Factory Brings THE MOLE PEOPLE, THE VENGEANCE OF SHE, and the WILLARD Redo to Blu-ray! 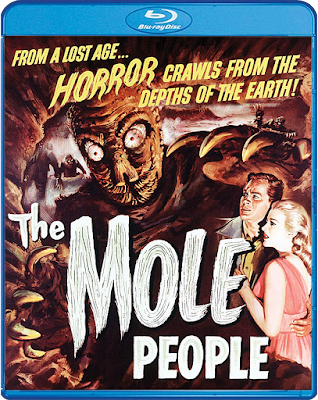 Scream Factory's 2019 lineup of new Blu-ray releases has been stellar, and this week is no exception! Universal's lesser classic THE MOLE PEOPLE, Hammer's Fantasy-Adventure THE VENGEANCE OF SHE, and the 2003 redo of WILLARD have just been released with lots of cool extras and gorgeous HD transfers!

I for one am very excited for these new discs, and can't wait to add them to my collection! For more details on each Blu-ray release, please continue onward!

Synopsis: John Agar (ATTACK OF THE PUPPET PEOPLE), Hugh Beaumont (Leave It To Beaver) and Nestor Paiva (Creature From The Black Lagoon) star as three archaeologists who come upon an unusual race of albino beings who shun all forms of light and have mutant mole men as their slaves.

Because of their "magical cylinders of fire" (what we know as flashlights), these archaeologists are treated like gods – until they try to liberate the mole people. Can the archaeologists escape this hallowed mountain in Asia ... or will they be destroyed in a strange underground world?

Extras:
THE MOLE PEOPLE is now available wherever Blu-ray discs are sold and should cost between $23 - $25. Order a copy now from AMAZON, BULL MOOSE, DIABOLIK DVD, or directly from SHOUT! FACTORY. 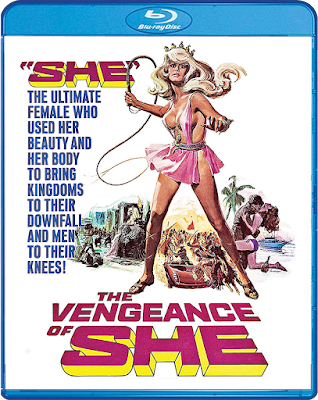 Synopsis: A young beautiful woman named Carol (Olinka Berova) is plagued by hallucinatory voices calling her "Ayesha" and is drawn by a mysterious force toward the east. During her voyage, she meets Dr. Philip Smith (Edward Judd) who decides to accompany Carol to her unknown destination. Eventually the two reach the lost city of Kuma where Carol is greeted as the reincarnation of Queen Ayesha, the beloved of King Killikrates (John Richardson).

Philip is imprisoned and meets Za-Tor (Noel Willman) who tells him of the high priest's deceitful plan to obtain the secret of immortality by bringing back Ayesha to King Killikrates. Will Philip escape in time to reveal the truth and save Carol from destruction?

Extras:
Scream Factory's THE VENGEANCE OF SHE Blu is now available and should cost between $24 - $27! Add this to your Hammer Blu-ray collection now and get a copy from AMAZON, BULL MOOSE, DIABOLIK DVD, or directly from SHOUT! FACTORY. 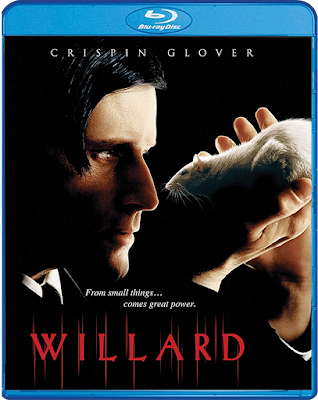 Synopsis: For years, Willard Stiles (Crispin Glover, THE WIZARD OF GORE) has been trapped in a dead-end job with no friends and no future. Willard's life seems hopeless until he makes an eerie discovery: He shares a powerful bond with the rats that dwell in his basement.

Now a guy who has been trampled in the rat race his entire life is suddenly ready to tear up the competition ... beginning with his boss.

Crispin Glover leads the pack in this skin-crawling thriller that takes an unforgettable journey into the mind of a madman!

Extras:
Yowza! Three audio commentaries? New interviews and behind-the-scenes featurettes? A new 2K transfer?! Out of the three new titles out this week, WILLARD clearly received the most love, and you can pick it up today for $24 - $27! Order a copy of this rodent-remake now from AMAZON, BULL MOOSE, DIABOLIK DVD, or directly from SHOUT! FACTORY.