Lock Your Doors and Windows Tight - Sony Pictures is About to Make February 19th a Most Frightening Night! 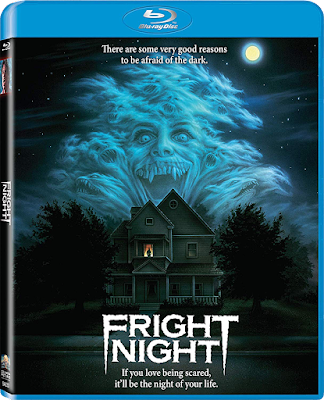 I missed out on the extremely limited Twilight Time Blu-ray release of FRIGHT NIGHT (which is now going for ridiculous prices), and never got around to picking up a region free import, so this is GREAT news! FRIGHT NIGHT is easily one of my favorite flicks and I'm excited to see it get a decent 'Region A' Blu-ray release! Hurray! Now I can finally retire my DVD!
Synopsis: Teenage Charley Brewster (William Ragsdale - FRIGHT NIGHT PART 2) is a horror-film junkie, so it's no surprise that, when a reclusive new neighbor named Jerry Dandridge (Chris Sarandon - THE PRINCESS BRIDE, CHILD'S PLAY) moves next-door, Brewster becomes convinced he is a vampire. It's also no surprise when nobody believes him. However, after strange events begin to occur, Charlie has no choice but to turn to the only person who could possibly help: washed-up television vampire killer Peter Vincent (Roddy McDowall - CLASS OF 1984, THE PLANET OF THE APES Series).

Extras:
Sony's new FRIGHT NIGHT Blu-ray will be available everywhere on Tuesday, February 19th, and should cost between $20 - $30! If you've missed out on the Twilight Time and Eureeka! releases in the past, now is your chance to own what is arguably one of the best vampire films of all-time! Secure your copy now from AMAZON, BULL MOOSE, or from DIABOLIK DVD!