Now Available on Blu-ray: Bela Lugosi Rises from the Grave in THE RETURN OF THE VAMPIRE! 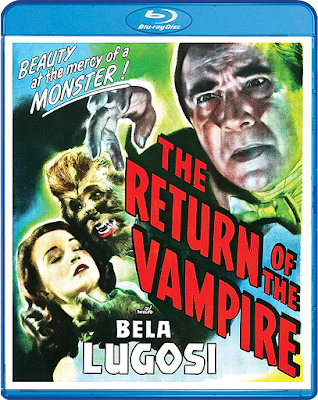 Intended to be a followup to DRACULA, this oft-forgotten Horror classic features Lugosi as a "different" vampire, who is accidentally freed during a Nazi bombing raid! I've been meaning to see this one for a while (mostly to see Lugosi's werewolf servant in action), and it looks like Scream Factory's new Blu is the way to go!

Synopsis: Bela Lugosi rises from the crypt in this blood-curdling horror classic! In 1918, Armand Tesla (Bela Lugosi), a 200-year-old Hungarian Vampire, prowls the English countryside, feeding from the jugulars of the villagers. But Tesla's reign of terror is interrupted when a pair of scientists, Lady Jane (Frieda Inescort) and Sir John Ainsley (Roland Varno), drive a railroad spike through his heart.

The "un-dead" Tesla remains safely entombed for two decades until the impact from a stray Nazi bomb accidentally releases him. Along with his werewolf servant Andreas Obry (Matt Willis), the resurrected vampire now plots vengeance on the family that put a halt to his nocturnal feasting!

Extras:
Holy cow! At the most, I expected this release to be bare bones with a trailer at most! The inclusion of an 8mm version plus a trio of audio commentaries (I bet the Lee Gambin is worth the price of admission alone) makes this a must-have in my book! Scream's THE RETURN OF THE VAMPIRE Blu-ray is now available and should cost between $23 - $25! Order a copy now from AMAZON, BULL MOOSE, DIABOLIK DVD, or directly from SHOUT! FACTORY.