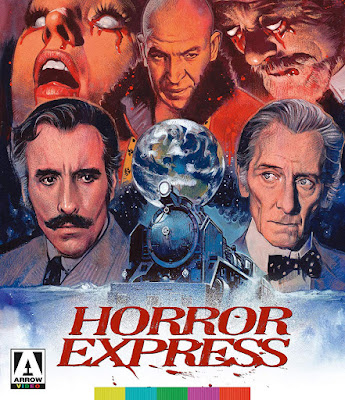 EUGENIO MARTIN'S FILM ADAPTATION OF "WHO GOES THERE?" GETS A NEW 2K TRANSFER AND EXTRAS!

I first saw HORROR EXPRESS in its native format (35mm!) at Hudson Horror Show 8, and my mind was blown! I immediately ordered the Severin Blu-ray after seeing the film and have been actively sharing Eugenio Martin's Horror classic with everyone I can! And now Arrow Video has given the film a noticeable upgrade, which means I may have to double-dip! If you're on the fence about "upgrading" to this new release, continue to reading to see if Arrow's HORROR EXPRESS Blu-ray is right for you!

Synopsis: Horror royalty and Hammer alumni Peter Cushing and Christopher Lee reunite for this tale of mad monks, primitive humanoids and bloodthirsty zombies set aboard a train bound for Moscow – all aboard the HORROR EXPRESS!

Renowned anthropologist Saxton (Lee) boards the Trans-Siberian Express with a crate containing the frozen remains of a primitive humanoid which, he believes, may prove to be the missing link in human evolution. But all hell breaks loose when the creature thaws out, turning out to be not quite as dead as once thought!

Directed by Spanish filmmaker Eugenio Martín, HORROR EXPRESS remains one for the most thrilling (and, quite literally!) chilling horror efforts of the early 1970s.

Extras:
Arrow's HORROR EXPRESS Blu-ray is now available and should cost between $24 - $28! Experience it for the first time, or upgrade from your previous release and order this title from AMAZON, BULL MOOSE, or DIABOLIK DVD!