John Badham's DRACULA Once Again Rises from its Blu-ray Tomb on February 19th! 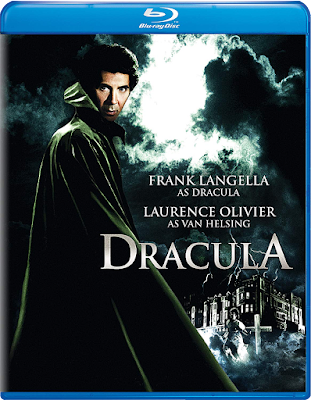 THE 1979 ADAPTATION OF BRAM STOKER'S NOVEL RETURNS TO BLU-RAY, SANS A DIGITAL COPY.

Since the 1930s, there has been so many iterations of Count Dracula on film: From Bela Lugosi, to William Marshall, to John Carradine, and Duncan Regher I've just about seen them all. And yet I've never taken the time to watch Frank Langella in the role as the immortal Count. I've definitely gotta knock this one off my (eternally growing) list of films I need to watch!

Also, I must note that this Blu-ray disc seems to just be a cheaper re-release with the same specs & extras as the last DRACULA Blu. The only noticeable difference is the lack of a digital Ultraviolet copy of the film. (Which is no big loss seeing as how Ultraviolet will be going extinct this April.)

Synopsis: Throughout history, Dracula has filled men's hearts with fear – and the hearts of women with desire. In this stylish production of Bram Stoker's classic tale, Frank Langella (MASTERS OF THE UNIVERSE) gives an electrifying performance as the bloodthirsty Count Dracula in search for his ultimate bride. Meanwhile, the renowned and relentless vampire hunter, Van Helsing (Laurence Olivier - CLASH  THE TITANS), seeks to end the Dark Prince's reign of terror over the citizens of Transylvania. Featuring a mesmerizing cast, fine direction and a superbly atmospheric musical score, Dracula is an unforgettable adaptation of one of the most enduring horror legends of all time.

DRACULA (1979) returns to Blu-ray on Tuesday, February 19th and should cost around $10! Order yourself a copy now from AMAZON or BULL MOOSE!