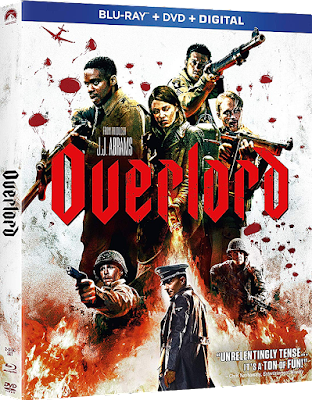 I missed out on OVERLORD when it came to theaters last year, but finally got to see this J.J. Abrams production the other day, and I was pleasantly surprised by it! While its not the first film to tackle the Horror genre in war-torn 1940's Germany (see also FRANKENSTEIN'S ARMY), this movie did it better than most. It has likeable characters, great effects, and edge-of-your-seat action sequences - I'm definitely going to be adding it to my movie collection!

Synopsis: With only hours until D-Day, a team of American paratroopers (Wyatt Russell, Iain DeCaestecker, Jovan Adepo, and John Magaro) drop into Nazi-occupied France to carry out a mission that's crucial to the invasion's success. Tasked with destroying a radio transmitter atop a fortified church, the desperate soldiers join forces with a young French villager to penetrate the walls and take down the tower.

But, in a mysterious Nazi lab beneath the church, the outnumbered G.I.s come face-to-face with enemies unlike any the world has ever seen. From producer J.J. Abrams, Overlord is a thrilling, pulse-pounding action adventure with a twist! 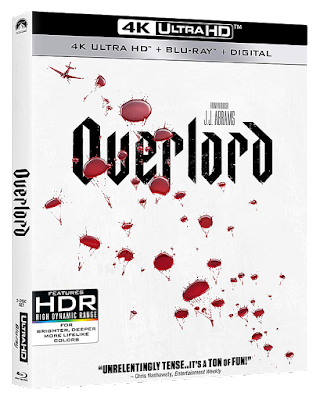