DOUBLE DRAGON is Now Part of the MVD Rewind Collection! 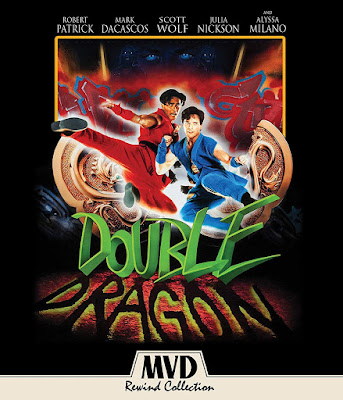 THE INFAMOUS FILM ADAPTATION OF THE BELOVED VIDEO GAME GETS A COLLECTOR'S EDITION BLU-RAY!

DOUBLE DRAGON is definitely on the shortlist of films vying for the title of "worst adaptation of a video game property ever," alongside MORTAL KOMBAT: ANNIHILATION, STREET FIGHTER: THE MOVIE, and my personal favorite, SUPER MARIO BROS. - THE MOVIE. (I'm proud to say I actually own a Limited Edition Steelbook of that one!) And yet, DOUBLE DRAGON has apparently garnered enough of a cult following to warrant the Collector's Edition Blu-ray that we're looking at today!

DOUBLE DRAGON roars to life with amazing special effects, spectacular action sequences, and a knock-about sense of humor. It's the year 2007, and what remains of L.A. is now "New Angeles," a city ravaged by earthquakes, tidal waves and vicious gangs. The evil tycoon Koga Shuko (Robert Patrick - TERMINATOR 2: JUDGMENT DAY) is obsessed with finding the two halves of a talisman known as the "Double Dragon," which will give him awesome mystical powers.

Two teenage brothers, Jimmy (Mark Dacascos - ONLY THE STRONG, BROTHERHOOD OF THE WOLF) and Billy Lee (Scott Wolf - Party of Five) find themselves in possession of the amulet's missing half, thrusting them into the adventure of their lives. With the help of Maria (Alyssa Milano - Charmed) and her vigilante group "The Power Corps," Jimmy and Billy must summon all of their courage, resourcefulness and martial-arts skills to stop the villain's malevolent plan. Crackling with the energy and humor of its two heroes, Double Dragon is a high-octane action spectacular. Buckle your seatbelt and enjoy the ride!

Extras:
MVD Rewind Collection's new Blu of DOUBLE DRAGON is currently available and costs around $28! Take a trip down memory lane (either because you love this movie, or are just really eager to see if it's as bad as you recall) and order yourself a copy now from AMAZON, BULL MOOSE, or DIABOLIK DVD!