Scream Factory Wants to Be Your VALENTINE on February 12th! 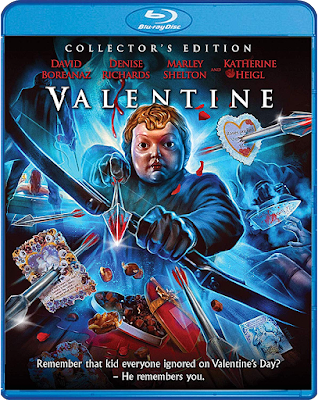 I remember seeing VALENTINE on the big screen back in 2001, but aside from the little twist at the end I don't remember much else about it. In fact this seems like a movie that isn't discussed very often among horror fans, which is why I was extremely shocked to see VALENTINE get so much love from Scream Factory! Guess it's time to revisit this (possible) gem, which arrived a little late to the game after the slasher boom of the 90s!

Synopsis: Revenge is sweet, just like Valentine's Day chocolates. At least, that is what a vengeful, Cupid-masked killer thinks. Be my Valentine ... or else! Broken hearts and other mortal wounds await a cast of contemporary young stars when they play dating-scene veterans dying for love in this humor-laced, twist-filled thriller cleverly directed by Jamie Blanks (URBAN LEGEND) and starring David Boreanaz (Angel, Bones), Denise Richards (STARSHIP TROOPERS), Marley Shelton (SCREAM 4, PLANET TERROR), Katherine Heigl (Grey's Anatomy) and more. Cards, candy and flowers are nice. But for fans of stalker-shocker terror, there's nothing like a VALENTINE.


Extras:
WOW! Just.... wow! After nearly two decades, VALENTINE makes its Blu-ray debut with a Collector's Edition worth bragging about! This stacked release should cost between $25 - $28 and will be available everywhere on February 12th! Order yourself a copy now from AMAZON, BULL MOOSE, DIABOLIK DVD, or directly from SHOUT! FACTORY. (Note: The limited edition poster offered by Scream Factory is officially sold out as of February 6th.)